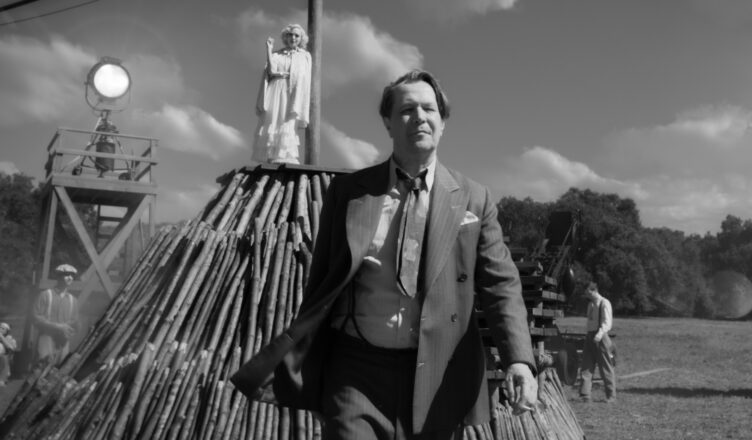 It isn’t often that a movie needs footnotes. But unless you’re particularly well versed in 1930’s California politics and Hollywood movies, Mank is just such an instance. The beautiful black and white film that debuts on Netflix today expects viewers to be up to date on events that took place 80 years ago and will not slow down for those that failed history class.

The new flick centers on Herman J. Mankiewicz, as he writes  the screenplay of what many consider to be the greatest of all movies in Citizen Kane. Beyond its colorless palette Mank aims to pay homage to the 1941 movie with its depiction of a flawed “great” man as it flashes back to pivotal points in his life.

The great man in Mank would be considered a supporting character in the old studio system of which he is a cog. Mankiewicz is depicted as a black out drunk, but also a world class wit. A gambler and a man of integrity, Mankiewicz gets drawn into the circle of the media tycoon William Randolph Hearst. Mankiewicz repays the hospitality by basing his scathing Citizen Kane on Hearst’s life.

The director of Mank, David Fincher, has long drawn inspiration from Kane. He directed the 1989 Madonna music video “Oh Father,” utilizing images cribbed from Orson Welles. He also helmed what could be considered the 21st century version of Kane, in The Social Network which focused on another man of immense wealth and power in Mark Zuckerberg. You also have to wonder if Fincher’s trademark of surprise twists have been influenced by Citizen Kane and his Rosebud.

But this is a different sort of project for Fincher. Like in all his movies, every shot in Mank is brilliantly framed. And as in his best work the dialogue is filled with clever banter.

Mank does start to meander as it stretches past its second hour. But it’s so historically dense, it might have been a case of my brain tiring out from trying to keep up with who’s who in the 1930’s Hollywood caste system.

Mank seems like a movie that would be enhanced by a second viewing. And there’s enough good things in it that I’m looking forward to giving it a second look.  But first I’ll have to complete the required homework assignments of watching Citizen Kane and building up a Wikipedic knowledge of all the characters involved.