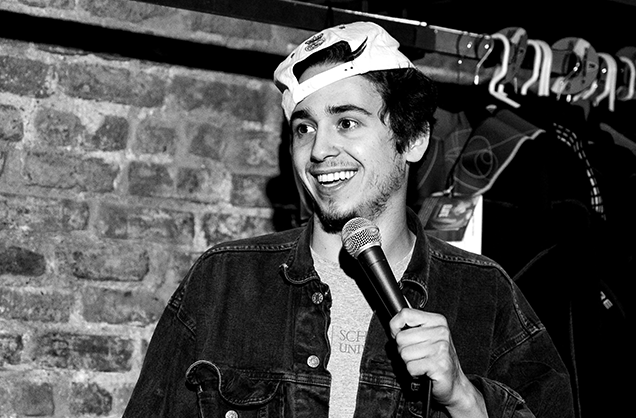 Marcello Hernandez, a local comedian of Cuban-Dominican descent, was recently announced as a new cast member on the 48th season of Saturday Night Live. This is a huge accomplishment and great for everyone in South Florida, especially our comedy scene, which does not get enough shine.

For Marcello Hernandez this is the beginning of a career that could make him one of the “voices” of the next generation. What a golden opportunity and an accolade well deserved!

The Miami comedian was recently named a “New Face of Comedy ” at the prestigious Montreal “Just for Laughs” festival.  And locals may know Hernandez from his work with Only in Dade. He was the creative director of their lifestyle page.

If tuned into the local standup comedy scene, Hernandez has been around for years.

He first started performing stand-up comedy locally in March of 2016, at Taurus, a popular bar in Coconut Grove featuring an established Thursday comedy night, at the time hosted by Miami-veteran comedian Freddy Stebbins.

“I said this guy, there is something about him. He’s going to be famous,” explains Stebbins. “He was in town from college (at John Carroll University in Ohio) and called asking if he could perform. Marcello played at least fifteen to twenty times at Taurus. To me, it was very obvious. Talk to any comedian in South Florida that has seen him on stage, they would say he has a dynamic range and a special energy.”

“I used to yell at him because he was always yelling his jokes and losing his voice,” explains Mary Smith, another veteran Miami comedienne and hostess of several open mics. “Marcello would get-up all the time. He would do my open mics at Irish Times and Cafe Blue. He was at the Improv with Ellie Rodriguez. The Have Nots with Dom Perenzin. I was critical of him because I knew he was good.”

Marcello Hernandez stands to be only the 4th Latino in SNL’s history, joining Mellissa Villaseñor, Horatio Sanz and Fred Armisen, whose mother is Venezuelan.  As far as we know, he will be the first emerging from Miami’s comedy scene.

This is awesome and feels a little bit like when Moonlight won Best Oscar.

In Miami, among locals who’ve lived here for awhile, we are a tight, proud bunch.