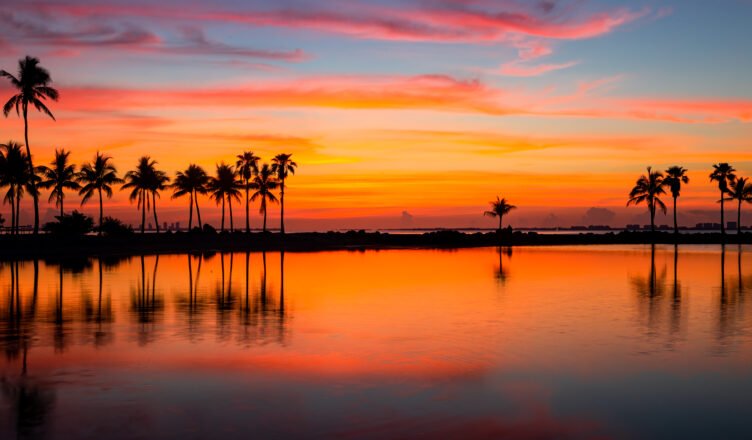 Arriving in the pitch-dark at Matheson Hammock Park, along the western edge of Miami’s Biscayne Bay, I had no idea the sky would soon explode into layers of flaming red, pink, orange and yellow, reflected beautifully in the lagoon below. This is what dedicated sunrise photographers live for, and it’s the reason we wake up before our alarms to venture out on vacant beaches, the Everglades and urban causeways to record the tropical lightshow. I have been doing this for four years now, and I still can’t predict with any accuracy how the sky will look tomorrow. You must wait until the morning, go outside, look to the east and enjoy the surprise. That’s the beauty of it.

The photograph shown here is what emerged from that lovely visit to the park. I literally have thousands of sunrise pictures now, all of them inspired by, and dedicated to my wife, Judith R. Potter, whom I lost in the spring of 2019 to ovarian cancer after a three-year battle. As Judith’s full-time caregiver, I struggled emotionally with the stresses, exhaustion and fear of losing my life partner. Judith, who always cared more about her family than herself, suggested that if I was to survive our cancer battle, I needed to find a daily activity away from the doctors, medicines, hospital rooms, insurance battles and hospice care. I agreed with her and chose sunrise photography, because I could do it near the house and finish up early before the long day of cancer care began.

As I write in my new book, Sunrise: A Photographic Journey of Comfort, Healing and Inspiration, “It is the unvarnished truth that all of my bright and colorful sunrise photographs began from extreme pain, fear, isolation, sadness and loss. But as miracles will sometime have it, and in a great surprise to me, the images actually turned out to be the exact opposite of the way they began. So many people tell me they find my photos to be upbeat and exciting or comforting and calming. Friends have also said the morning pictures are inspiring and give them hope, which moves me deeply, and of course, propels me to shoot even more of them. My clever wife clearly knew what she was doing.”

Still to this day, seven days a week, I get out of bed in the dark, prepare a pot of coffee, eat a light breakfast, load my car with two cameras and a tripod, then drive on empty roads in search of the next sunrise. In the beginning, I did it primarily for me, to help myself cope and heal, sharing the photographs with Judith, who loved them. But after I began posting some of the shots on Facebook and Instagram, I received an avalanche of support from friends and social media followers who said the photos also helped them with their problems. They wanted more images, and they wanted a book, which energized me with a new purpose in life. On my daily morning outings, and with input from fellow photographers and insightful friends, I came to understand the healing power of the sunrise. For me now, it symbolizes a new beginning, restoration, redemption, strength, warmth and a second chance to do better today than we did yesterday. As the dawn and sunrise approach, I can see, feel and even hear the ecosystem come alive. The overnight winds soften, the ocean waves calm, the fog lifts, birds begin to fly and the fish chase prey in the mangroves and ocean flats. High in the sky, the black and blue colors of night begin to fade, and if the clouds and humidity are just right, the darkness is replaced by a glow of soft pastels. Then, every so often, the hues deepen, and the sky seems to erupt in a blast of radiant pyrotechnics. This is the height of what I call “Magic Time,” that one hour of dramatic change from dark skies to a blazing tropical sunrise. Why on earth would anyone want to sleep late and miss all this?

I often marvel at how my life now as an outdoor photographer is so much different from what I did for forty-one years as an on-air television correspondent, specializing in investigative reporting. While working for local stations, and then ABC News, CNN and NBC News in their Miami bureaus, I covered the Mariel Cuban boatlift, the McDuffie race riot, the murderous Colombian cocaine cowboys, the Mexican drug war, the Grenada invasion, Cuban and Haitian migrant smuggling, the Ted Bundy and Manuel Noriega trials, political campaigns and scores of hurricanes. I joke with friends that I’ve gone from chasing narcos to pelicans and pretty sunrises.

Surprisingly, there are similarities between these worlds. As in news gathering, you must always be on time to catch the rising sun. The skill set needed to surreptitiously photograph smugglers is also the same used to regularly find and photograph birds, alligators and other wildlife. You need preparation, positioning and patience – lots of patience. The biggest difference is that my life these days is much more serene, without the editorial, deadline and travel pressures of network journalism. Best of all, it’s a satisfying and most lovely way to start each day — chronicling and sharing my sunrise for Judith.

Mark Potter will be speaking at the Miami Book Fair on Saturday, November 19 at 11 am at Magic Screening Room Building 8.

Mark Potter is a 41-year TV news veteran. He was a correspondent for ABC News, NBC News, and CNN. Potter has devoted his retirement to photographing Florida’s sunrises, wildlife, and nature.

View all posts by Mark Potter →