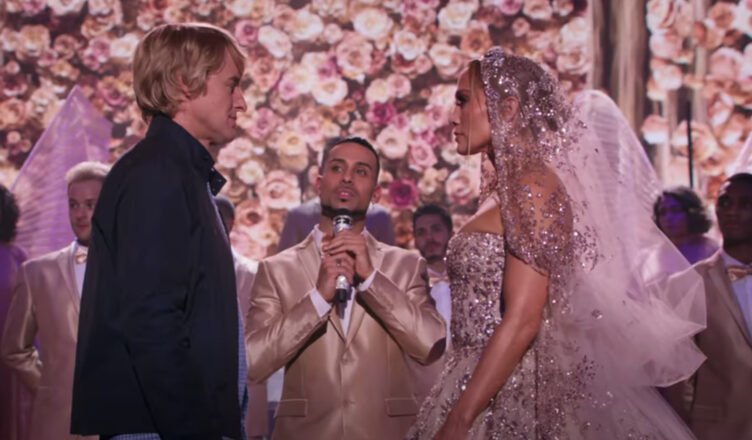 Of course, I don’t literally hate her. Not as a person, certainly. I don’t know her. I’ve never met her. Never will. And even if I did, I’d probably still turn into a pile of gushing goo. “Girl. Pretty,” I’d stammer while doing a pee pee dance.

No. I hate the calculated persona she puts forward. The cold diva schtick.

Just not my thing.

I confess these feelings for transparency. Clearly, I walked into Marry Me, Lopez’s new romantic comedy, with a bit of baggage.

But hey, it’s a romantic comedy. I like those. Life’s complicated and confusing enough that I enjoy the simplicity of a good romcom. So, despite the Lopez Effect™, I decided to give this one a chance.

Marry Me (the title is more of a command than question as there is no question mark at the end) is a throwback to the romantic comedies of yore that Meg Ryan, Drew Barrymore et al. used to put out on a regular basis, though it’s closer to the Kate Hudson ones whose premises became more and more outlandish in a failed effort to stave off staleness (How to Lose a Guy in 10 Days, anyone?).

How absurd is the set up for Marry Me?

Check it: Lopez stars as Kat Valdez, a superstar pop singer engaged to Bastian (Maluma), an equally famous singing sensation. They plan to get married at the end of one of Kat’s extravagant concerts in front of millions of fans in New York. Just as Kat is raised to the stage, though, decked out in an appropriately ludicrous and elaborate wedding gown, video of Bastian’s infidelity with Kat’s assistant leaks. Distraught and shell-shocked by her fiancée’s betrayal, she spots a man holding in the audience holding a sign that reads “Marry Me?” (a question mark is included on that one at least). Impulsively, she calls the stranger to the stage and acquiesces to his placard’s request.

The man holding the sign is Owen Wilson’s Charlie Gilbert, a charmingly dorky math teacher who’s only at the concert at his daughter’s behest (she’s a huge fan while he basically has no idea who Kat Valdez is) and only holding the sign because his friend (Sarah Silverman clearly enjoying a chance to improv just about every scene she’s in) handed it to him when she went to the bathroom.

The two get married onstage, but will the fake couple actually fall in love?

Was Gigli a misguided bomb?

Obviously, the premise is ridiculous, but I give director Kat Coiro (who’s the showrunner for the upcoming She-Hulk TV show for Disney+, which I am very curious about) credit. She spends a good amount of time trying to explain why these two souls would make that decision. I mean, nothing will ever be able to make their choice believable, but I appreciate the attempt. What follows the preposterous setup is standard romcom fluff, but it’s just on the right side of charming.

One of the reasons for that–and look, this is hard for me to say—is Lopez herself. She won me over here. She plays the role sweetly, mostly staying away from the preening diva stuff in the sense that she doesn’t act spoiled or petulant. It helps that Lopez is playing a character closer to her public persona. Lopez in a romantic comedy playing a pampered superstar I can get with. Lopez playing a blue-collar worker like in her late ‘90s romcom, Maid in Manhattan, less so. I just don’t buy it. I mean, it’s all calculated of course, the superstar with a heart of gold stuff is subliminally trying to convince us that’s who Lopez is in real life. But, eh, she makes it work here. Her emotions come off as genuine.

Actually, it’s Charlie that gets a bit in the way of the movie.

I get what they’re trying to do with his character. He’s supposed to be so chill and unassuming that he cuts through all the superstar artifice surrounding Kat. It’s a solid concept that I’d dig watching. Owen Wilson can do laid-back charm in his sleep, so he’s still fun here, but the writing lets him down. He often comes off more dickish than charming. When Kat takes off her hair extension and drops it on the floor, Charlie gets up and stomps on it, pretending he thought it was a rodent (do you think she’d enjoy his dirty-ass shoes all over something she puts on her scalp?) and then assures her that she is both beautiful with or without the extensions. It’s like that guy who swears a woman is beautiful if she’d just take all that fucking make-up off. It’s all about what the guy wants. What if Kat simply likes extensions?

Charlie’s actions aren’t a deal breaker mostly because of Wilson’s easy-going appeal, but it feels like he’s written by a white dude in his 40s who thinks he gets women but really doesn’t (no, not me! The screenplay is credited to Harper Dill, John Rogers and Tami Sagher).

At least the movie makes attempts to acknowledge Kat’s struggles as an aging superstar in a business that worships youth. It doesn’t do too much with that, but I’ll take it, especially since the heroine in the graphic novel Marry Me is based on is a 24-year-old, Brittney Spears-esque pop star with blonde hair and blue eyes. Casting Lopez instead, who’s in her early 50s and of Puerto Rican heritage, gives the movie a more interesting perspective.

All that aside, and despite some of Charlie’s lameness, I rooted for the couple and generally enjoyed their scenes together. Lopez and Wilson don’t have burning chemistry, exactly, but there is a geniality between them that spreads through the whole movie. It’s feel-good nonsense, but it did make me feel good, so that’s something.