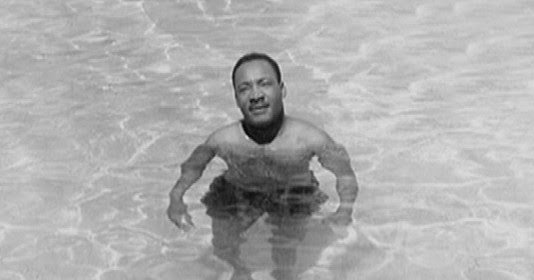 Miami does love an opportunity to throw a parade. You would think that would be the one reason why our city was the first to host a Martin Luther King, Jr. Day Parade.  Every third Monday of January since 1977 the parade has marched along Liberty City’s Martin Luther King, Jr. Blvd. (in 2021 the tradition of an MLK day parade will continue though you’ll have to tune in online to watch it).

Most people would think the civil rights leader’s birthplace of Atlanta or perhaps the place of his untimely death of Memphis would have started the tradition of throwing an annual parade for Martin Luther King. But that credit belongs to our Magic City.

Miami does have a secretly strong connection with Martin Luther King. He visited the city several times. Much of his time in Miami was for a little rest and relaxation. He usually stayed at Historic Hampton House (the setting of the recently released movie One Night in Miami). That hotel’s pool was where the above bathing suit shot of Dr. King was taken.

But he put some time in on the struggle while in Miami as well. Most famously Martin Luther King gave an early version of his I Have A Dream speech at Historic Hampton House.

While that day’s speech wasn’t recorded, a snippet of a recording of a 1966 speech King gave at University of Miami was recently unearthed.  The speech was on “The Church’s Involvement in the Civil Rights Program”. 1,200 people listened to his oration on how the church needed to stay involved in civil rights.