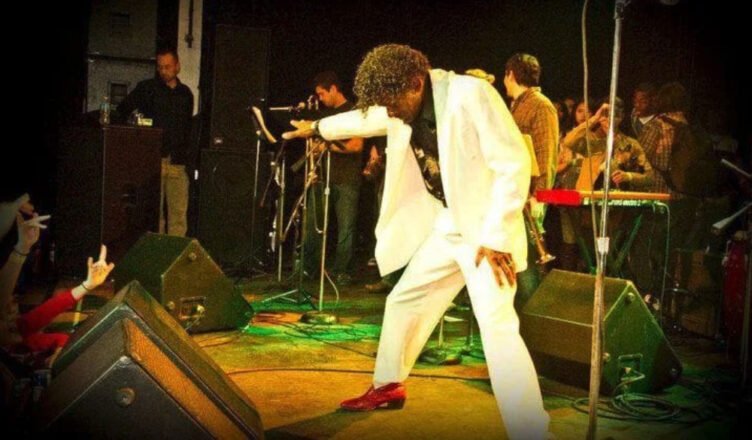 True funk is eternal, and Marvel’s Eternals funk is true.

Calloway is of course Florida’s official King of Funk. He’s also signed to Miami’s own Henry Stone Music, where CEO Joe “Boogiedown” Stone has taken everything he learned from his legendary father and carved his own groove into the beat of history.

Here’s what Rickey Calloway had to say about joining the Marvel Cinematic Universe and becoming a funk superhero worldwide.

First of all congrats!

How do you feel about joining the Disney and the Marvel Universe?

It ain’t sunk in yet. I can’t wait til it’s out and my grandkids can see and hear it because they’re into that kind of stuff. I’m just trying to envision it in my mind. I think it’s gonna be cool. I’m excited.

What have you heard about the movie?

I read a couple of clips and I’m going to meditate on it. All I know is that it’s one of the songs that I did with the Dap Kings  and I’m just going to spend some time and research it and see how it all comes together. You gotta realize, Joe was working on this for a long time. It’s just so cool. This is something in my career that I’m very proud of, and humbled too. A lot of hard work went into this music. There have been good days and bad days throughout, but it’s been awesome. I was on my own for so long just doing everything myself and managing, but it’s gotten to a point that Henry Stone Music has took me to another level that I just never would have dreamed would happen. Joe has really been here for me when I need him. I can call him at any time of the day or night. I actually have to stop calling him at three in the morning, but he’s always there for me and working hard to get me where I need to go and I am so thankful that I met Henry Stone and Joe Stone. And he’s become a very hard working manager and publisher all in one.


How did “Stay In The Groove (Parts I and II)” come about?

It all started when I was in New York cutting records with The Dap Kings. Kenny Dope  was with us in the studio. It was a lot of fun and I can’t believe the track is still hanging around. “Stay In The Groove” was pure inspiration. I flew home and couldn’t even remember the words that came out of me. The whole band was there and it was just a cool time. We connected right away. I just closed my eyes and kept singing what I felt in my heart off the top of my head, just going with it, going with the feeling. I was into a zone when we recorded that. We didn’t even want to stop. We probably did 12 or more minutes that eventually got chopped down. I like to record like that. Everybody was feeling it. And after we got through, Kenny Dope bought us some pizza from down in Brooklyn, and that was a good pizza, and a good beer. And we were just sitting and having fun talking about the record. We had no idea what would happen, but it was like family. I didn’t wanna leave New York. I hope I get back there some time.

R.I.P Sharon Jones, was she there?

Unfortunately Sharon Jones was shooting a movie with Denzel Washington at the time and couldn’t be there.

Where did you record?

Dap Tone has a studio. A really nice studio where Amy Winehouse and a lot of big people recorded. They got this basement. Funky basement. And in fact, I played the B3 organ on that song. I kept bugging them to let me play, and that’s me. And it ain’t no whatchacallit, high tech. It’s just a mom and pop studio with a great sound and a lot of history and I felt comfortable there. No pressure. It was cool.

How did this all start with the Dap Kings?

What happened is that I was working at University of North Florida back around 1999. I was doing shows and benefits for UNF and donating the money to students for scholarships and I had a guy who saw one of the news articles about me call me up. Johnny Garrett was his name. He said, “Rickey, you know your records are big in Europe.” Which, at the time I didn’t really believe him, because this was my old records. He gave me the phone number for a DJ in the United Kingdom. I called this guy George and said, “Hey, are my records big over there? I hear you’ve been trying to get a hold of me.” He said, “Let me get you in touch with Kenny Dope.” Now fast forward to when I put a CD together called Rickey Calloway King Of Funk. I brought it to Henry Stone and he liked the album and the rest is history. Before Henry passed away, he put me with Joe Stone, so now I belong to Joe and I’m enjoying it. I’m having fun. I’m 68 years old and having the time of my life.