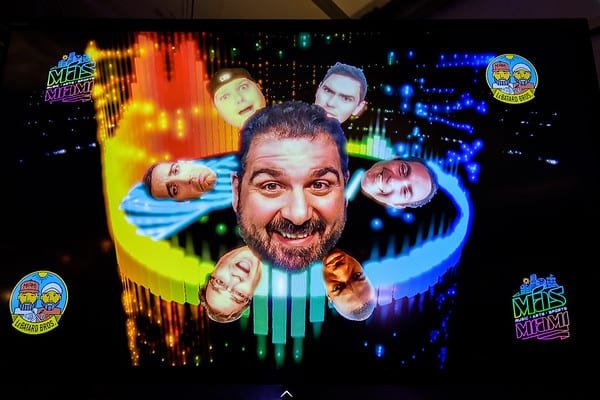 The first MÁS Miami( music, art and sports ) was back in April at Blackbird Ordinary and the second followed in August up in Fort Lauderdale at Revolution and Stache simultaneously. Both went really well but were a little clumsy. The third MÁS that took place Saturday night at The Wynwood Yard definitely showed that the event is getting it’s footing.

The art portion was strong as they brought back two favorite artists from previous MÁS events, Carlos Solano and SONA.

The “S” in MÁS was nicely represented by people like ex Miami Dolphin great, Ricky Williams and tons of ESPN hosts and celebs. This picture you see right here is of ESPN host Pablo Torre surfing the crowd. Who knew Pablo was so hardcore? Let’s see Bomani Jones, who was also at the event, pull that off.

One highlight was former Miami Marlins president, David Samson, speaking and getting boo’ed on stage responding with a “1.2 Billion dollars. Fuck you!” and a middle finger raised higher than anything anyone thought he was capable of. Wow, right? What balls, some say.

That seems to unfortunately be the thing that is getting an unhealthy amount of publicity from this event. As someone who was there and privy to the climate, let me speak on this…

Firstly, it is simply low hanging fruit to go after Samson for what he said at this event. The reason people identify with the Dan Le Batard show isn’t because of the sports, or lack of sports, or juxtaposition between the two. It’s honesty and vulnerability. The show demands honesty from it’s guests, otherwise the interviews are deemed boring. The show demands honesty from it’s hosts.

Even to the point of Stugotz being famous for his lies and the show being ever vigilant in seeking those lies sticks out like a duck hunter giggling in the woods.

Many people are critical of Dan’s relationship with David Samson because they feel ripped off by the organization time and time again over the stadium deal and many other things.

Despite that being childish at best, the fact is that David Samson is brutally honest. Sometimes to a fault.

Which is rare in this business. He is also a great interview and Dan would be neglecting his duties if he failed to exploit that asset. Especially now that Samson is now no longer contractually obligated to hold his tongue on Miami Marlins inside business information he was involved in.

So when David Samson wants to have a couple of drinks and speak at his friend’s 50th birthday party to a rabid crowd of haters and mostly people booing for the fun of it, his reaction was pretty spot on perfect and hilarious.

So what was essentially a great joke (the best jokes have truth in them) turned into fodder for the media.

As they say on the show, “You don’t get the show!”

What made MÁS 3 extra special was a debut DJ set by the show’s producer, Mike Ryan Ruiz. A lot of build up was explored on the show as they discussed his trepidation about performing his first DJ set in this platform. Mike Ryan delivered in spades while dropping in some show sounds as the rest of the show’s crew and special guests cycled on and off the stage. The crowd ate it up.

What really tied everything together was simply accessibility. Anyone can throw bands and artists out there and tell you to like it. But constant interactions from Dan and the rest of the show really demonstrated how much they cared about the crowd, and city, that made them what they are. Let’s see what they have in store next time.

For an inside look at MÁS Miami 3, check out all these photos, courtesy of Jason Koerner.