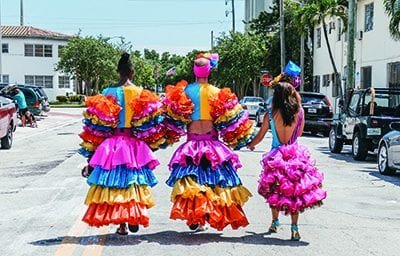 MDC Live Arts is producing some of the best art in Miami. This year, its 29th, has been a remarkable mix of local and world class talent and programming, with an emphasis on  women.

The final MDC Live Arts show of the season featured three of Miami’s best artists, all female, all dancers, all commissioned to produce three original pieces using the Live Arts space as a muse.

All three pieces could stand alone yet they also felt oddly interrelated, like parts of a whole, with its entirety representing Miami.

Directed & choreographed by  Adele Myers, the night began with this high-energy number. A musically driven, chatty interactive treat focusing on the theme of artist-audience interaction.

On the surface, in the ice dome, The Stage Show had the highest energy of the night. It drew the most applause from the sold-out crowd. Underneath the surface, in the basement of our imaginations, this production reminded us just how hard it is to “put on a show.”

It’s hard to wear a mask and  speak in public, or perform, even interact. No one sees the fears, flaws, secrets and bruises. All we see is the end result, always a veneer, a mere crack in the sunshine and rain of our existence. Miami also has that “performance” in its personality.

And The Stage Show put it on display.

After a 20-minute intermission, we are treated to Laborers. It was an engaging, lucid, visceral, slow-moving, slow-tempo, wonderful piece, the brain-child of Miami’s Ana Mendez. Anything born from Ms. Mendez’s brain will have you on the edge of your seat, scratching at the fabric, like a cat needing to flex its claws.

Laborers explored the theme of transition. It featured performers in faceless spandex garb, wearing curly black wigs. They moved at a slow pace, at the inevitable unforced pace of change; delicate, painful, inevitable. This piece was really powerful and personal.

Plus, no city knows transition more than Miami.

The night ended with Tropical Depression, an original piece care of Miami’s Rosie Herrera, who sort of lives in a world close to the sublime. So delicate, fluid, funny, sexy, and touching, Tropical Depression, with its amazing costumes, and courageous performers, explored the idea of glamour. Through the lens of Miami’s Cuban diaspora mixed with Americana at its finest, this piece pulled at heart strings while forcing the audience to keep their eyes wide open.

The white gown number with Ryan Walker Page was beyond. Buried underneath a wedding gown, splashed with graphics of the Doppler radar during a hurricane, it appeared psychedelic, troubled yet smooth.

The coffee cup number with Katie Stirman wheeled out naked, hidden behind Styrofoam, with colada cups as pasties, was as original as it gets. The piece was followed by Kashia Kancia trying to clean up the mess to Abba’s “The Winner Takes It All.”

The whole piece felt like glamour, such a fickle fiend.

Glamour in its preparation and fierce beauty is both frustrating and magnificent. It’s fake and forever omnipresent.

Glamour is another Miami trope we can’t ignore.

And Tropical Depression reminded us.

This piece is already up to 560 words.

Could easily write another 560 but we don’t do that in blog-land.

So, thank you, MDC Live Arts. And congratulations on another stellar season. We’ll see you in September.