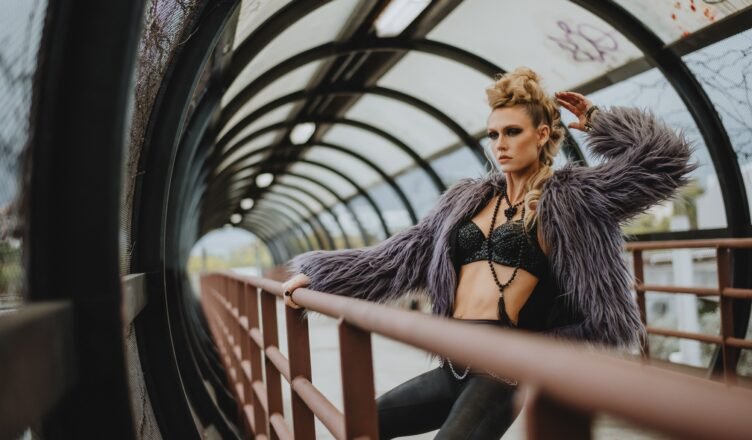 If Lana Del Rey, Matt Bellamy (Muse) and Sebastian Bach (Skid Row) had a vocal love child, the product would be Megan Morrison. Her style of singing ranges from sultry sweet to in-your-face battle cries and the songs she writes have a purpose. These days Megan’s siren-like pipes are a transcendent voice for the recovery community, and the Miami-based American singer, songwriter, and professional fire dancer is back with a searing new collection of songs appropriately called Appetite for Freedom.

Fans can pre-save the new album at meganmorrison.fanlink.to/AppetiteforFreedom. Megan Morrison will celebrate the official release of Appetite for Freedom with a free listening party at Mama Tried (207 NE 1st Street, Miami, FL 33132) beginning at 8 p.m. on Sunday, July 3, 2022. For more information, visit morrisonmusicofficial.com.

Here are 10 questions with the singer-songwriter / fire performer:

Where were you born and raised?

Megan Morrison: I was born in Millinocket, Maine and lived there until I was seven. My mom and I moved to Amherst, Massachusetts and that’s where I was mostly raised, going back to Maine in the summers to spend time with my dad and family up there. I moved to NYC when I was 21.

What is your educational background?

I studied classical voice performance at the University of Massachusetts and transferred to Hunter College in NYC my senior year.

What got you into fire performing?

I owe that to my husband. He had just started working with fire when we were first dating. I have a dance background so I immediately fell in love. I wanted to be a ballerina when I was younger but I had too many other interests to solely focus on ballet. Fire dancing was a new chance for me to become a professional dancer of some sort. I fell in love and still am.

What is your earliest musical memory?

That’s hard. My mom said I would harmonize with the vacuum cleaner when I was a baby, but obviously I don’t remember that. I think singing in church with my mom when I was young. She was the organist at our church where they let me sing my first solo at age four. It was “Take Me Out to the Ball Game”. My grandpa was a brass player and conductor so we would go see his band play when I was younger. Those were good times.

You are in recovery. What pushed you to change your life around?

I wish I could say I just woke up one day and was sick of it, but that’s not how it happened. I really did want to stop for many years, but if you know anything about addiction, you know that’s not usually how it works. My health was declining rapidly and I was well on my way to following in my dad’s footsteps. He passed away from liver cirrhosis in 2010. After some really bad few months I was finally convinced to go to rehab by my family and close friends. After one failed attempt I went back and got it the second time. My sobriety has been and continues to be beautiful and I’m so grateful for it every day. It takes work though. It’s not for the lazy or faint of heart.

What is Megan Morrison listening to these days?

It really varies from day to day. Always Muse and Highly Suspect. Run the Jewels and Rage Against the Machine when I’m feeling pumped. Classic jazz like Coltrane or deep house like Ben Bohmer when I’m feeling mellow. Jan Blomqvist when I’m feeling bittersweet. He’s awesome. And the Wicked soundtrack when I feel like singing, which is almost always.

Some of your recent releases on Spotify are on the dance tip. What inspired this new contemporary hard rock sound?

I was playing rock music way before I got into singing electronic music. My old band Dorothy’s Surrender, that I formed in 2012, was pure grunge. And before that, I sang in some punk bands in NYC. I love that I get to sing and record both styles, because some days I feel like singing at the top of my lungs, and other days I feel like getting really intimate with my vocals.

How did you meet Tony Alarcon?

I put the word out that I was looking for a guitar player for my new project and someone mentioned his name. I realized we were already friends on Facebook, so I reached out to him. We had a couple jam sessions and I was impressed with his ability to play the sound I was looking for. Eventually he jumped in to help me with the writing process of my songs.

What’s the best thing about working with him?

Tony is good at pushing people’s buttons, but not in a bad way. He’s a therapist, so he knows how to challenge people to overcome things they may think are hard or impossible. At first, I didn’t want him anywhere near the vocal booth when I was recording. But part way through I realized that his suggestions and comments, though annoying at first, were actually pushing me to be a better singer. By the end of the project, I didn’t want to record vocals without him there.

Who are your biggest musical influences?