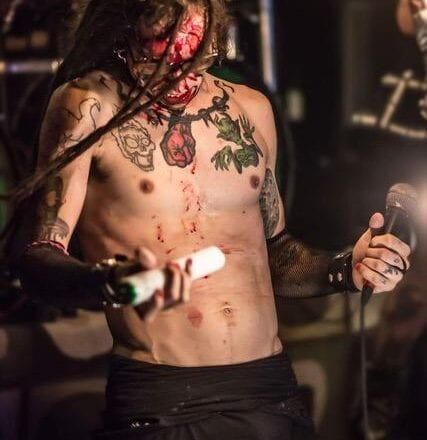 I had just gotten to Miami from a small city an hour south of Boston, where I’d lived most of my life. A city in which you would be unlikely to see a band at all, never mind a metal band, and certainly nothing like Mekronium. So when I first saw them on stage at Churchill’s Pub, I was changed forever.

I was covered in glass shards, possibly blood. I couldn’t gather my jaw off the floor despite my best efforts. Someone had to shake me out of it as I, sadistic hematophile, lingered there frozen in complete veneration.

Having formed in 2014, the crew named themselves after meconium, the medical term for a newborn’s first poop, straight out of the womb. An excellent choice for a band that poses a possible pathogenic hazard with every performance.

Mekronium is composed of beauteous songwriter Daniel Gil on guitar, the incredible and talented Lucha Spivacow on bass, badass babe Kevin Klingenschmid on drums, and dreadlocked demon Jo Moreira on vocals. Self-defined as “metal with heavy grooves” Mekronium is so much more. Bringing intense, fearless energy to the stage the whole crew is a delight to witness.

Drawing inescapable parallels to nu-metal gods Korn, and drawing on similar themes of suicide and abuse, Mekronium is a treat for anyone whose mum insisted “it was just a phase“ but never grew out of it.

Lyrics presented in equal portions of screams, cries, and a sort of stylized spoken word are layered over complimentary notes from guitar, bass, and drums. Riffs from Gil and Spivacow take no prisoners as they whirr and slam forward, frequently kissed by Klingenschmid’s brassy drums.

In addition to skillful playing, the band puts on an absolutely brutal show. You know you’re in for a ride as the squad sets-up what seems like a finely-developed-through-experience area on which to break stuff. They also have built their own signature lighting, being the professionals that they are.

Lights are a central component to Mekronium sets, as you may know, if you’ve ever seen Jo lift a light bulb. If you have, you know to shield yourself and your beer from what comes next. As long, tubular bulbs are smashed overhead, the blood starts to pour. Shards are then used for cuts to his abdomen, which too begins to bleed. Love them or not, you can’t call them boring. And love them, I do.

Hailing from South Florida, the band plays regular shows in and around Miami for your viewing pleasure. Sometimes locations hosting the crew know not what they’ve wished for.  Venues are occasionally horrified as Jo cuts himself on stage like it’s standard practice because it is. This has caused them to be banned by those who just couldn’t handle the heat of hellfire and opted out of the proverbial kitchen.

Your next opportunity to catch Mekronium is March 21 at Churchill’s Pub’s Libertad Festival. Not only will the show quench your thirst for metal, but it also benefits children affected by harmful political ideologies. Make the point to get it out and support what good is left in this world and some serious freakshow.