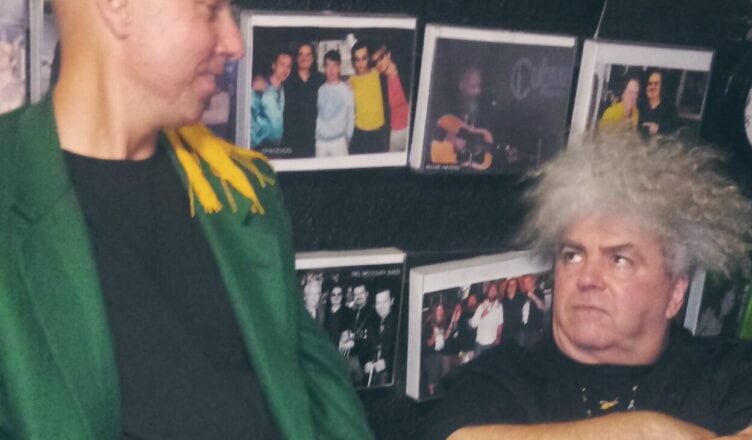 Due to time constraints, I Googled: “Handelsman Melvins” and then randomly cut and pasted pieces from the various features I’ve written about the Melvins from numerous online publications authored by me over the past decade or so:

“I played two rounds of golf this morning,” says King Buzzo. “I’ll play again after we’re done rehearsing this afternoon. I go to the golf course directly after rehearsal.”

For a moment, I wondered if she had more pimples on her face than I did, which really turned me on. I stood up, walked over to the small stereo, and flipped the cassette tape. As I inserted the cassette, I noticed that it was released by a record label called Boner Records. Ironically, I myself had a boner. But, let’s pretend I never told you that.

“I’ve been in and out of mental institutions my whole life,” repeated the Melvins’ Roger “Buzz” Osborne during our interview. “How about that?” he said slyly.

In 2010, ABC News correctly identified legendary rock group, the Melvins as a “cult band.” Meanwhile, the growing “Melvins Army” presently consists of over a million devotees worldwide. The fact is, the Melvins are not a “rock and roll band” at all. They deliberately defy any genre or scene that may claim them as their own, for reasons which we will now expose.

After more than 20 years of investigation, we have discovered that beneath their “rock star” exterior, the Melvins are, without a doubt, a dangerous cult.

“‘METALLIC COCAINE BE-BOP?” I thought, reading the line on the page again and again amidst the blaring background thunder and lightning emanating from the speakers of the small Sony cassette player.

“Good Lord! That is a perfect description of the Melvins music!”

The Melvins are the greatest living rock ‘n’ roll band ever. They are the Doors, Jimi Hendrix, Flipper, Black Sabbath, Miles Davis, Led Zeppelin, Black Flag, the Beatles, Bob Dylan, Andy Warhol, and the rest of whatever rock ‘n’ roll, modern art, beautiful poetry, science fiction, and all of heaven and hell mixed together blaring out of a wall of amplifiers could possibly be described as at this juncture. They take you into their vortex, which is where you want to be. It is such a beautiful place.

There was a knock on the door. I looked out the peephole, stoned. It was her: the woman that I had a crush on who called me a weirdo all the time from my Creative Writing class. I had forgotten that she was coming over to smoke! She was wearing her Ramones shirt and my heart melted like butter. She nodded towards the bong, and we each took a gigantic hit while Melvins’ Bullhead blared in the background.

In order to give you a better idea of the Melvins deceitful brainwashing techniques, we will now share excerpts from just a few of their demonic songs, written by His Divine Grace, King Buzzo:

“A picture of Jesus as an Indian over my bed/and playing with parts of myself.”

As you can certainly see in the above examples, the lyrics are like verses of maniacal pagan prayers or something from the Dead Sea scrolls; blending their bizarre mosaic of Hinduism, mystic-Christianity, Aleister Crowley Magic, and other mumbo-jumbo into an abstract-apocalyptic message, intended to contaminate the minds of our precious youth.

I pressed the play button, and Buzz’s incredible Zodiac riff began side 2.

She looked up from the bong like she was on a stage amidst tons of dry ice. Her beautiful bloodshot eyes were red like apples. She held her fist over her mouth and coughed.

“Weirdo… What kind of music is this?” she asked, weed smoke hovering from her luscious mouth.

“Metallic,” I answered, as cool as possible.

WHEN THE ABOVE DROP OUT OF LIFE WITH GUCCI HANDELSMAN VIDEO (FEATURING KING BUZZO FROM THE MELVINS ON TRIANGLE) GETS A MILLION HITS ON YOU TUBE (BEFORE JANUARY 12, 2020), I PROMISE YOU (DEAR READER) THAT I, GUCCI HANDELSMAN, WILL GET A FACIAL TATTOO. I GIVE MY WORD. PLEASE DON’T THINK THAT THIS IS A DESPERATE PLEA FOR ATTENTION. IT IS NOT.

I discovered that I must make this promise to you after using the Cut Up technique of William S. Burroughs for this very blog.