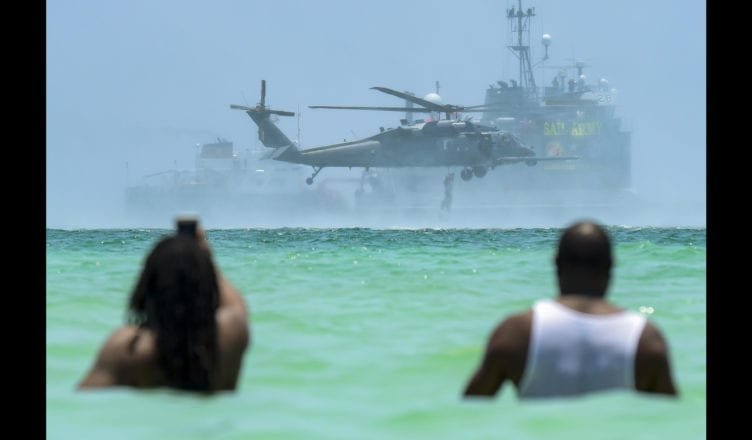 It seemed too late to try to make the event.

On a normal Saturday, any week of the year, it would take at least an hour. This is one of the busiest travel weekends of the year. Hit up Google Maps to check the commute time. 15 minutes, the computer read. Impossible. Hit re-fresh and the same. Packed the cooler, hopped in the car, hit I-395 with little to no traffic. Fifteen minutes later threw the car at Flamingo Park and walked towards the sand.

The city never looked so peaceful.

Miami Beach on Memorial Day is supposed to be this crazy, anarchistic, violent, out-of-control event. Well, not anymore.

And if you had to point at one specific thing, without question, it’s the Miami Air and Sea Show. The event brought law & order to a historically violent and insane weekend.

It was still Urban Beach Week and the crowd (of 250,000) still predominately African-American, as if black people were ever the problem. The problem in the past was always a lack of order. That’s what changed. Thanks to local law enforcement and the Miami Air & Sea Show, Memorial Day in Miami has officially and successfully re-imagined itself.

We can also thank the locals that fled because (historically and rightfully) they feared the weekend’s danger. Or they fled with hints of racism. Or they fled just because it’s a good weekend to travel. Either, or, the beach was good vibes. Beach goers sat on the sand, on chairs with umbrellas, sipped beers, ate BBQ and watched a kick-ass demonstration of America’s military might. And, honestly, what better weekend?

Some contrarians complained about the loud noise. And it was a little loud at times, but no more than standing next to a speaker at a loud concert. Other critics, colleagues and haters argue the Miami Air and Sea Show is a racist tactic designed to detract African-Americans from coming to Miami. Not true. They argue the show glamorizes war and the military industrial complex rather than our fallen warriors. Fair point, but come on.

Law and order is a good thing. Simple.

What’s the counterpoint to order? Chaos and anarchy?

From the infamous face eating zombie attack, to a slew of shootings and crime, Memorial Day weekend was one of the most dangerous weekends in Miami. Cops were getting shot. Major and excessive shootouts erupted in broad sight. Every year, the story coming out of Miami was how many people were arrested or killed.

A few years ago, then beach Commissioner Michael Grieco decided to end the chaos by championing the Air and Sea Show, among other tactics. Currently, a few years later, now a State Representative, it seems Grieco’s vision fully bloomed.

This weekend there were zero major incidents reported.

Keep fleeing the city in masses.

Some of us locals kind of like this new found Memorial Day weekend peace.