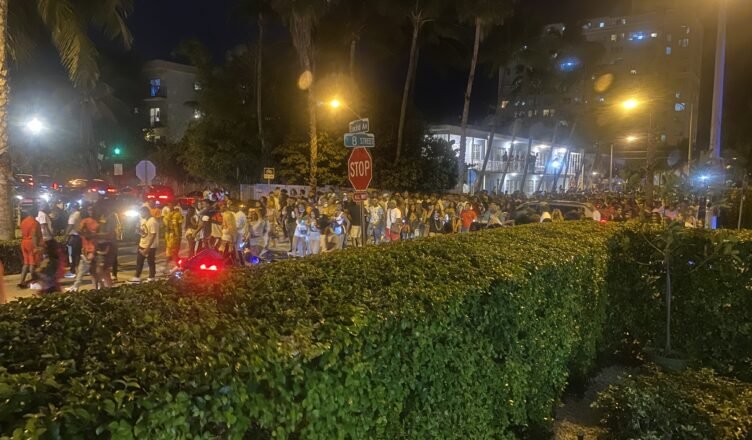 We’ve gotten used to the loud music blasting from cars outside our  windows. We figured the  sound  of screeching tires from motorcycles and even the occasional gunshot, were the collateral for living in paradise. But we’d never heard sounds in our South Beach neighborhood like we did last night at 8:30 p.m.

Thousands and thousands of Spring Breakers were herded from Ocean Drive down 8th street right past our apartment. The City of Miami Beach had issued a curfew at 8 p.m. in the Miami Beach “entertainment district”. As it got dark all the partiers had no place to go and so they slowly walked down our street smoking blunts, sipping from bottles and twerking on one another.

Red and blue lights reflected into our bedroom as a wall of police inched behind the Spring Breakers ever so slowly. They blasted a recording again and again you could barely hear over the hip-hop and sirens , “Attention The City of Miami Beach is under a state of emergency. There is a curfew in effect at 8pm. We ask you to immediately and peacefully disperse . Failure to comply will lead to your arrest and prosecution.  Thank you.”

By 9:15 the Spring Breakers and police were no longer on our corner. Now they were the next block’s problem.

The scene outside our window when Miami Beach Police protect businesses but not residents pic.twitter.com/tbDy8w9S8r