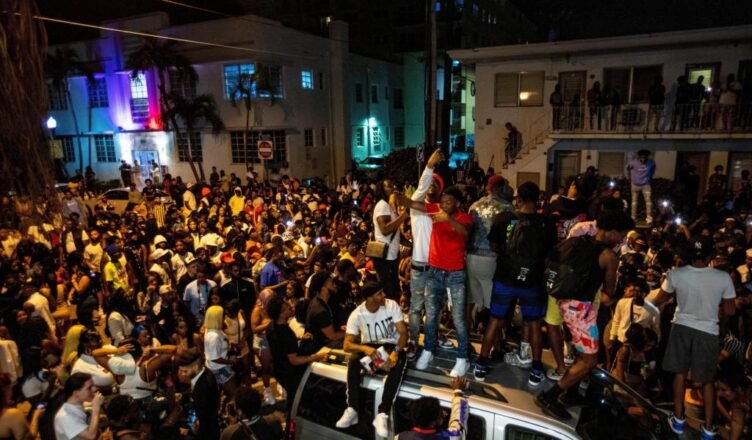 It could have been the dollar bills raining on the masses. It might have been the sirens. It was probably the moment parked cars turned into trampolines. I’m still not 100% sure but Sunday night as the clock struck 8:45 and a unified mob of mayhem made it’s way towards my apartment…a thought came to me.

If collegiate raging were a moving body of water then school and work would serve as a dam which contains it locally. When the floodgates open in March, cities like mine serve as a channel through which that moving body of water flows. Multiple channels generally prevent any one from overflowing, but what happens when there’s only one available? It floods.

As a Miami Beach resident for the last six years, I’ve been impressed at how efficient the local authorities have become at mitigating the chaos as it moves through our city. They’ve barricaded sidewalks. They’ve hired security to guard the residential areas against turning into drag strips. One of the most ambitious efforts I’ve seen was last year when they turned half a mile’s worth of sand into a makeshift prison yard equipped with a basketball court. They even brought in two extra lifeguard stands. One had a sign that read “Spring Break Miami Beach” which would serve as a backdrop for the revelers who were looking for a beach-worthy photo op. The other was converted into a DJ booth by the City of Miami Beach Police. Instead of paying one of the many talented curators of music this city is famous for, they chose a pair of middle-aged police officers who once had dreams of rocking a crowd. Unfortunately, those dreams never made it past the mid-’90s which was evident by their music selection. Either way, the point is the city knew what they were up against and made a decent effort at quelling the surge. So what the hell happened this year and who is to blame?

How could the City of Miami Beach not have foreseen that this year would be different, and not in a good way. We are one of the only cities in the country that broke up with COVID back in 2020 and decided to fully re-open. We allowed locals and tourists alike to get back to what we do best, turn up.  So when millions of college students were preparing to burn their masks for a week and go full Dalmatian on their livers, how did our local government not expect them to book their first flight to the Magic City?  The floodgates opened and rather than distributing that moving body of water evenly through multiple channels, it flooded the only one available.

Apart from the violence, I don’t have an issue with what takes place in my backyard throughout the month of March. I knew what I was signing up for when I relocated to Miami Beach. What I do have an issue with is the city not taking responsibility for their own actions and admitting that they dropped the ball. I hope this serves as a lesson to our local authorities. You can do better.