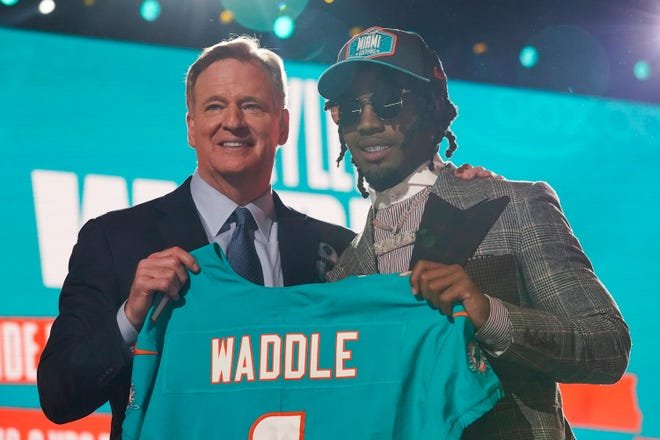 The 2021 NFL draft is finally over and the Miami Dolphins exited as one of a few presumed winners. After trading back from third pick overall to sixth Miami acquired an extra first round pick for 2023 in a tremendous trade by Chris Grier. Once again he gave Miami expansive options and flexibility. Flores and Grier continue to flip average assets for more valuable ones while giving up little in exchange. Miami’s front office has shown competency maneuvering around the draft often taking advantage of foolish general managers along the way. Miami could theoretically continue to have multiple first round picks extending to 2024, if the trend continues. As for this 2021 draft Miami came away with some excellent players highlighted by Alabama wide receiver and Tua’s former teammate Jaylen Waddle.

Waddle has electric speed, precise route running, and is a tremendous punt returner who can finish a play as quickly as he started it. At 5′ 10″ and 182 pounds, he’s small, smaller than even me, but that never stopped all-pro Tyreek Hill from becoming a top wide receiver. His size and weight are a concern along with his prior injury history, but if Jaylen can even be half the player Tyreek has become you can objectively call this a good pick.

With Miami’s final first round pick they selected University of Miami pass rusher Jaelan Phillips. A born and bred Fin fan Phillips possesses a motor and hustle that compares to no other. His ability to chase plays down from behind quickly got the attention of scouts across the NFL propelling him into the first round. Phillips plays the run excellent and has an array of pass rush moves that’ll disarm any offensive lineman. Jaelan’s only concern is his injury history, an unnerving trend across recent Dolphin draft picks. I believe Phillips could become an elite run stopper with an occasional sack or pressure on the quarterback. It should be noted that Miami’s had little success drafting and developing players from UM in recent years.

Miami Dolphins 2021 draft provided contributors even in the later rounds.

Liam Eichenberg, an offensive tackle from Notre Dame was selected 42nd overall and Boston College tight end Hunter Long got selected 81st overall. Both are solid picks with good value who will contribute immediately, though I do not see much star potential in this group. Eichenberg is a strong and smart player but lacks the footwork to be elite right away. Long had more catches than fourth overall selection Kyle Pitts but lacks his natural athleticism and running ability. Oregon defensive back. Jevon Holland was selected 36th overall after opting-out this past year. Not much tape exists, but the little that does confirm why Miami drafted him so high. Other than defensive line Holland can play anywhere, his instincts, speed, and versatility all pop when watching his film. This is exactly the defensive player coach Flores prefers.

Several Dolphin fans particularly on Twitter, have expressed disappointment in regard to the team not drafting a running back. These individuals don’t know basic draft fundamentals and lack awareness when observing the League. Miami’s 10-6 record last year wasn’t a fluke, but one must admit that it could have very easily gone the other way (thank you Fitzmagic). Accepting this creates clarity on why Miami couldn’t afford to reach and draft a position that has seen its value plummet over the last decade. Drafting Najee Harris in the first round for example gets you no closer to winning a Super Bowl, and the facts prove it. Paying a premium for running backs has hurt several franchises near and long term. Those resources are better allocated towards other more impactful positions. Having a committee of running backs who specialize in unique roles is more in tune with the current trend across the NFL. You can’t address every need in one draft, but you must stick to fundamentals and be aware of upcoming trends. Miami did that successfully while addressing key positions and set themselves up for the future once again.

I’ll give the Dolphins a B+ on an overall solid draft class that has low bust potential but moderately high star potential.