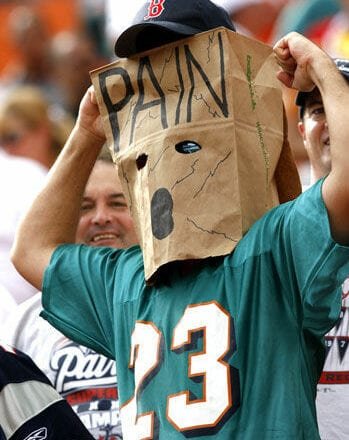 Like clockwork, South Florida’s pathetic excuse for a professional football team, the Miami Dolphins will probably have a losing season.

Anyone with a sliver of sports knowledge could’ve seen this coming.

They brought  in two quarterbacks that haven’t really impressed in journeyman and part time caveman impersonator Ryan Fitzpatrick and former UCLA QB1 Josh Rosen. They traded away all of their above-average talents with Kenny Stills, Laremy Tunsil and Cameron Wake all leaving. “Tanking for Tua” as ‘Dolfans call it, is unacceptable in the “win now” culture of South Floridan sports.

The decline of the Miami Dolphins has been a long time coming.

From the glory days of Dan Marino to losing by 59 points on the first game of the season and rumors of players like Minkah Fitzpatrick actively seeking trades, it’ll take a long time before the Dolphins are out of meme territory.

With the Miami Marlins and Florida Panthers being similarly poor, all of South Florida’s hopes and dreams now rest on the two teams with bright futures: Inter Miami and the Miami Heat.

The Miami Heat has always been a franchise that hates to lose. Club president Pat Riley has even said as much. In a 2018 press conference he stated the Heat organization has “no interest in tanking.” Even when the Heat are perceived to be in “losing upward,” the franchise still makes an effort to be competitive. They only missed the playoffs 11 times in the 31 years of the franchise’s history.

One can say that this winning mentality is bleeding into another Miami sports team that is set to kick off in 2020.

Club Internacional de Futbol Miami otherwise known as ‘Inter Miami’ is South Florida’s first-ever true professional soccer club. Founded in January of 2018, the club has seen the blueprint laid down by the Miami Heat and knew that it was imperative that Inter Miami has a winning culture surrounding the team.

We’ve already seen that come to fruition with links to high profile, world-class players like Edinson Cavani, Gareth Bale, and Lionel Messi. Owners Jorge Mas and David Beckham make sure to hear the concerns of each and every fan, which is more than what the Miami Dolphins have ever done.

We can only hope that the upcoming NBA season and the 2020 MLS season will inject some life into this lifeless sports town.