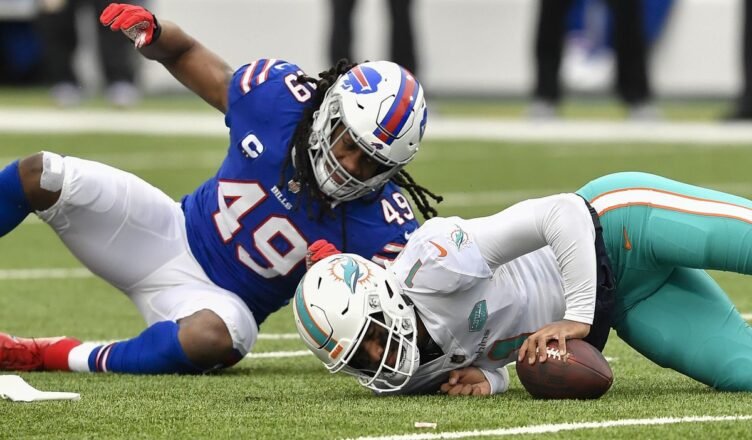 Miami did everything this offseason to reverse the 56-26 drubbing at the hands of Buffalo in last year’s season finale. Armed with a plethora of draft picks and a substantial amount of cash, general manager Chris Grier and head coach Brian Flores quickly got to work fixing Miami’s major issues. At the top of the list was offensive and defensive line followed by playmaking skill position players. The Dolphins drafted Jaylen Waddle and signed Will Fuller to legitimize their receiving core giving Tua additional weapons. However, Miami has failed to acquire any competent talent along the offensive or defensive lines.

This debacle lies squarely on the feet of Chris Grier, the scouting department, and even Brian Flores. Miami has tragically missed on many of their draft picks, especially the first and second rounders. Several of Miami’s young offensive linemen look simply to slow and to weak to offer any protection against even average defenders. They look lost, poorly coached, and often scared to thwart any threat against oncoming blitzers. Jesse Davis’s performance on Sunday was down-right disgraceful and cowardice.  His terrible footwork and soft hands which you can see in the video below led directly towards Tua Tagovailoa being carted off the field with a rib injury. The complete ineptitude of the offensive line and those who drafted or signed them is going to get somebody seriously hurt.

4th and 2, tua has no time and gets drilled. pic.twitter.com/d6nyLJINxF

The play of the defensive line continues to be poor and looks like one of the worst units in the entire league. 2019 first round draft pick Christian Wilkins can’t generate an ounce of pass rush and is inconsistent at best when stopping the run. 2021 first round pick Jaelan Phillips has yet to see any significant playing time and all indications are that this was an incredible reach by Grier. You need high end picks particularly along the defensive front to come in and have an immediate impact and Phillips can barely sniff the field. Bills quarterback Josh Allen was never rushed and the defense gave up a 40 yard touchdown run on Buffalo’s first possession. 2020 first round selection Noah Igbinoghene has been a complete failure and yet to see the field this season. Fellow 2020 first round pick Austin Jackson couldn’t block a mailbox and has routinely been benched because of atrocious play. Have I mentioned that Justin Herbert looks significantly better than Tua Tagovailoa yet?

We can witness this alarming trend and to be frank it should come as no surprise given Chris Grier’s history. Since Grier became general manager in 2016 Miami has only drafted one pro bowl caliber player still with the Dolphins  (Xavien Howard) and the next closest players are miles away from even consideration. Grier has been with the Miami Dolphins for 20 years and we have nothing to show for it. No playoff wins in 20 years and an absurd number of draft and free agent misses is what Grier has given our franchise. The hiring of head coach Brian Flores has gone well thus far but he too has shown little ability to scout and coach even average offensive talent. Confusingly and stupidly, Miami also has dual offensive coordinators which have produced 17 points in eight quarters.

Now is not the time to panic but it’s becoming increasingly obvious that Chris Grier is hurting this franchise and offers nothing of value in return. If the Dolphins cannot fix their interior, they will miss the playoffs and land Tua or whichever other brave soul decides to play quarterback in the hospital. Sunday’s game was shameful and vitriol will quickly shift to owner Stephen Ross if it continues.