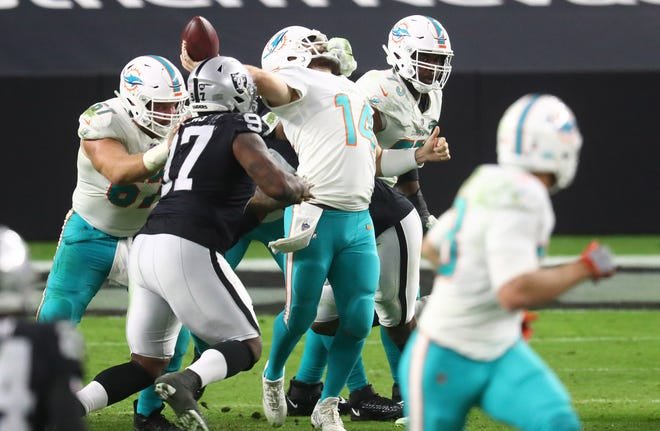 The Miami Dolphins ended their 2020 campaign 10-6 narrowly missing the playoffs by mere percentage points. Several months earlier the prospects of Miami wining eight games let alone ten, were slim to none. If Covid-19 wasn’t the issue, then a rookie quarterback with new coaches surrounded by marginal talent at best should’ve been enough to sink any playoff aspirations quickly.

Well, that’s not what happened.

Journeymen Ryan Fitzpatrick led Miami to a 3-3 record. But coach Brian Flores in a bold move inserted rookie Tua Tagovailoa hoping to provide a spark for his young football team. Led by exceptional special teams and a top three defense, Miami proceeded to go 7-3 playing meaningful games well past Christmas for the first time in years.

Miami was the only team to force a turnover in every single game this season which is no small feat. Xavien Howard paced the NFL with 10 interceptions and has a real opportunity to win the Defensive Player of the Year award. Linebackers Andrew Van Ginkel and Jerome Baker each had breakout seasons as well as tight end Mike Gesicki. Running back Myles Gaskin proved he belongs and should be a big part of the offense moving forward.

The same can not be said however in regard to Miami’s quarterbacks.

Fitzpatrick struggled early on. He hurt the Dolphins in key moments by throwing poor interceptions. Tua continued the trend by regressing Miami’s offense and habitually having to get bailed out by the defense or a 38-year-old Fitzpatrick. We’ll discuss the offensive woes at a later date, but to be clear, the Miami Dolphins are 10-6 in-spite of their two signal callers.

Coach Flores has done an unbelievable job recreating this roster and doubling the win total in 12 months. Keep in mind the Dolphins are the youngest team and have little depth to speak of at many major positions. One can question the play-calling and overall timidity of the offence, but the ability to make adjustments at the half is where coach Flores and coach Chan Gailey excelled.

Player development is another area were Miami overachieved by getting key contributions routinely from undervalued and under-talented players. For the second year in a row Miami improved as the season wore on this time barely missing the playoffs.

This season came as a great surprise. It should bring hope to any Dolphin fans looking the end their 20 year alcohol and prescription drug addictions. Perhaps the best news came when the Houston Texans fell to 4-12 awarding Miami the third pick in April’s draft. The Dolphins own four of the top 50 picks and will use them wisely to build an even stronger team. For now, let’s celebrate that the  New England Patriots are not in the playoffs. And even better the Jets missed out on the Trevor Lawrence sweepstakes.