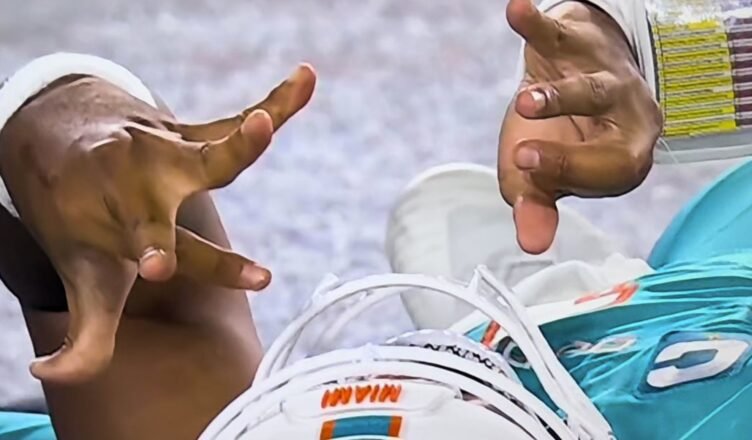 The Miami Dolphins had four whole days where they were on top of the world. On Sunday, September 26 Miami beat the Super Bowl favorite Buffalo Bills, to remain undefeated. The Dolphins defense looked stout, the offense looked explosive and the sky looked to be the limit.

There was one strange moment in the game however. At the end of the second quarter Tua took a late hit and banged his head on the turf. As he got back up, he shook his head,  jogged off and stumbled to his knees. He stood back up and would have collapsed again, if teammates didn’t hold him up.

After halftime Tua was back in the game. He threw a spectacular deep throw to help the Dolphins take the lead. With the victory all seemed right with the world and Tua’s health.

But the next Dolphins game was only four days away. The NFL Player’s Union  began an investigation on why Tua was allowed to return so quickly back into the game.  And concussion experts were advising Tua not to play so soon after what appeared to be an obvious concussion.

If Tua takes the field tonight, it’s a massive step back for #concussion care in the NFL.

If he has a 2nd concussion that destroys his season or career, everyone involved will be sued & should lose their jobs, coaches included. We all saw it, even they must know this isn’t right https://t.co/vxpaOif5rh

But the Dolphins and Tua both claimed the quarterback didn’t have a concussion. It was a back injury, they said, that caused his wooziness.  Dolphin fans like myself willfully ignored this bullshit explanation, popped some popcorn Thursday night and got ready to enjoy some prime time football between the Dolphins and Bengals. The beginning of the game was everything a Miami fan could hope for. Big plays by both teams, and a couple beautiful throws by Tua.

But again towards the end of the first half tragedy struck. Tua was thrown to the ground by what looked to be an average, innocuous sack. But this time Tua stayed on the ground with his fingers splayed in unnatural directions. Players from both teams came on to the field to pray before Tua was carted off on a stretcher to be taken to a local trauma center.  The game continued, but it was hard to care about the outcome. The image of Tua on the ground unable to control his hands was so horrific, it inspired even fans of Miami’s arch-rival Buffalo to donate thousands of dollars to Tua’s charity foundation.

If only Tua’s own franchise had behaved with as much integrity. After the loss to the Bengals, Miami Coach Mike McDaniel, got very defensive stating again that Tua had not injured his head in the Buffalo game, only his back and ankle. McDaniel passed the buck absolving himself of any blame of rushing Tua back into action by claiming his quarterback  was cleared to play “by several layers of medical professionals.”

When the Dolphins previous coach Brian Flores was fired, one of the reasons stated was because he could not get along with Tua. But I found a quote from 2020 that showed the Dolphins previous coach had his quarterback’s interests much more in mind than his successor does. Flores was under pressure to play Tua in spite of his still recovering from an awful hip injury. Flores’ response, “Look, the honest thing for me is if it was my kid, and he had a serious injury like that, I wouldn’t want his coach to throw him in there because of media pressure or anything like that. That’s kind of how I approach this situation and really all situations. The players, essentially, they are my kids. So no one is going to pressure me into doing anything. When we feel like he’s ready to go, we’ll put him in.”

My two main concerns with McDaniel’s hiring was he had no experience as a head coach and he seemed too much of a company man. When your company is run by a corrupt incompetent like Stephen Ross that could prove to be disastrous.  And Thursday night it surely was catastrophic, when Tua momentarily lost brain functions.

The other team I root for is the Miami Heat. Besides that franchise rewarding its fans with championships, they’re an easy team to root for because they treat their players in an honorable manner. In 2015, their all-star Chris Bosh suffered from blood clots and the team shut him down for the rest of the season. In 2016 he returned, but mid-way through the season the blood clots unfortunately came back. Despite being a championship contender the Heat organization refused to let him return to the court.

The danger was too much.

Bosh was mad, suing the team, but the Heat stood firm saving him from his overcompetitive self. Six years later Bosh is alive to see his kids grow and get himself inducted in the hall-of-fame.

It’s not too late for the Dolphins to behave honorably as well. After decades of bullying scandals, lawsuits alleging racism, and suspensions over tampering, they could do the right thing for once and save Tua from his overcompetitive self.

Do not let this kid play again this season.

Give his young mind time to recover. True, that decision might lead to throwing away what looked to be a promising 2022 season, but there will be other seasons.

This goes against football’s tradition of playing through pain. I remember Dan Marino, the hero of my youth getting knocked cold in a 1992 game against Seattle. He was woken up with smelling salts and led Miami to a game winning drive though he later claimed to have no memory of the end of the game.

Marino is still alive 30 years later but felt the consequences from that and other hits enough that he joined the 2014 lawsuit against the NFL for their lack of care over concussion-related brain injuries.

Sadly, it doesn’t look like the Dolphins are learning from the past. The team is already downplaying the severity of Tua’s latest injury. McDaniel said “The best news we can give is that everything is checked out that he didn’t have anything more serious than a concussion.” They rushed him out of the hospital the same evening as the concussion instead of observing him overnight and had him fly back with the team. There’s already pressure from fans to get him back on the field as soon as possible.

A couple more losses and I’m worried McDaniel will cave to that pressure and put Tua back in harm’s way before he has time to fully recover. Here’s hoping for their young quarterback’s sake they don’t act so short sighted and let him heal.