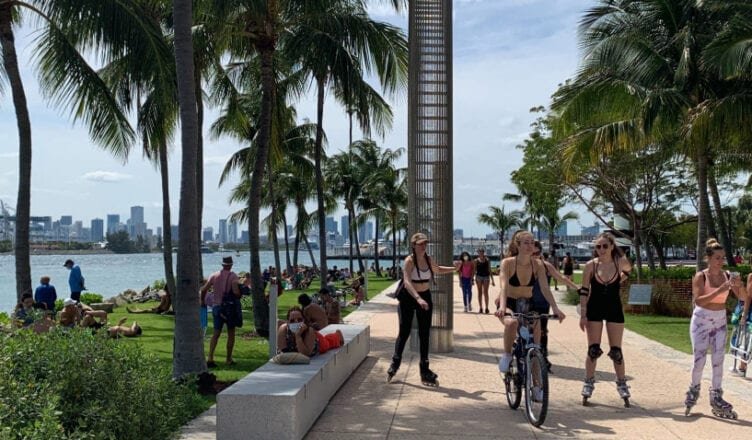 Restaurants, stores and bars finally opened in South Florida. Next week they’re threatening to open our beaches too. But still they warn us after our two month quarantine that things won’t be getting back to normal yet. Instead we will have a new normal.

But what is this new normal? Let’s take a look at what some of Miami’s favorite pastimes might  look like after our quarantine hibernation.

1-95 and the Palmetto have been relatively empty the last couple months. There will be a lot of rusty drivers on the road. Be careful as that leased BMW probably won’t be able to cut you off from three lanes away with such ease. On a positive note the CDC reported facemasks will get more oxygen to drivers’ heads allowing them to comprehend the meaning of stop signs and turn signals.

It was widely reported that from February 17 to April 12 the city of Miami went without a single discovered murder. That seven week streak is the longest duration since 1957 that not a single person got whacked in the Magic City. So be extra nice as you get out of quarantine to your maniac neighbors, they might want to make up for lost time. Although now that people are finally leaving their homes, we might discover a lot more missing persons. Anyone who ever saw Weekend at Bernie’s knows how easy it is to make a corpse seem alive during a Zoom meeting.

Stay at home orders and curfews are a buzzkill for booty shaking.  When clubs start opening with limited capacity you will get a clear view of how a two month break can wreak havoc on our collective celebrated rhythm. Beware, it might look a lot more like Milwaukee than Miami on the dance floor. Come to think of it though if they keep the facemask requirements, it will actually look more like Saudi Arabia out there than the Midwest.