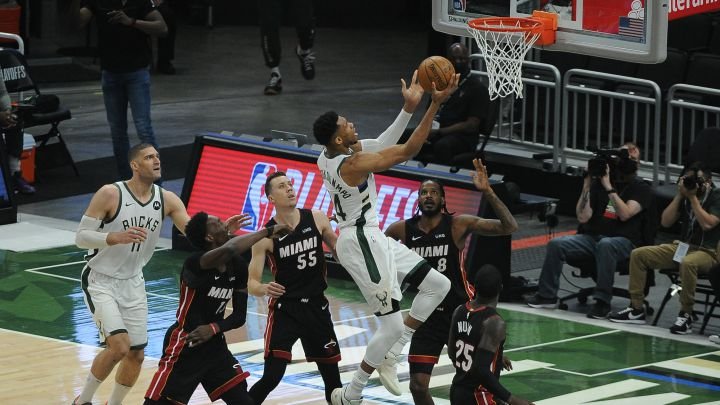 The Miami Heat season came to a bitter end Saturday afternoon after the Milwaukee Bucks swept the defending Eastern Conference champs in four games. Milwaukee was well coached, bigger, tougher,  and just an overall better basketball team. Too often Miami looked uninspired, lethargic, and downright soft with zero grit or heart present. The fashion in which The Heat lost is more surprising than the actual outcome. Fans and many media pundits predicted a longer series where Miami would at least be competitive or even win.  From the opening tip of game 2 until the anticlimactic end the Heat never stood a chance.

Miami bled out their pride, guts, and culture. The loss lends credence to the notion that Miami was a “bubble” team who could not compete when things returned to normal. This is likely the worst playoff performance in the franchise’s proud history and they only have themselves to blame.

A dim reality has rolled up on Miami’s shores,

the Miami Heat do not have a superstar player. You would have to back nearly 70 years to find a team who won a championship without at least one hall of fame player. The formula is rather simple, acquire a transcendent generational star athlete then surround them with adequate talent. Miami has been able to figure out the latter, but since Lebron James departure in 2014 finding that superstar player has been an issue. Jimmy Butler is an all-star but lacks the offensive consistency and shooting ability to be the best player on a championship team. Bam Adebayo is an all-star as well, however too often he gets bullied by larger forwards or centers and tends to disappear when his shots are not falling.

Earlier in the year Miami had an opportunity to trade several young players (Jimmy and Bam excluded) and draft picks for MVP and scoring champion James Harden. Admittedly, I railed against the move for what at the time appeared to be a nonsensical trade, and the end of season certainly makes my opinion look rather foolish. However, I still believe Harden would not fit properly but one can only imagine “what if”.

With that option exhausted, where else can Miami Heat get a bona fide number one superstar?

Two-time champion Kawhi Leonard has been linked to the Heat because of his close relationship with Butler, but that seems unlikely considering his personality and love for Los Angeles. Guard Bradley Beal has been rumored to Miami for more than a year and this appears to be the most likely option. Regardless, Miami doesn’t have to make any major significant changes to reach the next level. If the Heat fail to get a “whale” as Pat Riley describes it, an outside scoring guard who can create their own shots will serve just fine.

It’s important to remember exactly how much Miami overachieved during last year’s Finals run. A return to the mean or a correction was certainly in order especially considering the shorter offseason and the improvement of many other teams. The Heat are 57-51 outside the bubble since the start of last season, that’s incredibly mediocre and explains the unpredictable nature of this team. I don’t believe Erik Spoelstra and Riley will stand pat and we should expect at least several minor changes. If the right situation presents itself be confident that Miami will pounce on a premier player. Nobody’s lost confidence in this franchise or its players.

Sure, the loss and the matter in which it occurred is embarrassing but my confidence is unwavering. The Miami Heat will improve this offseason and once again be in contention next year.