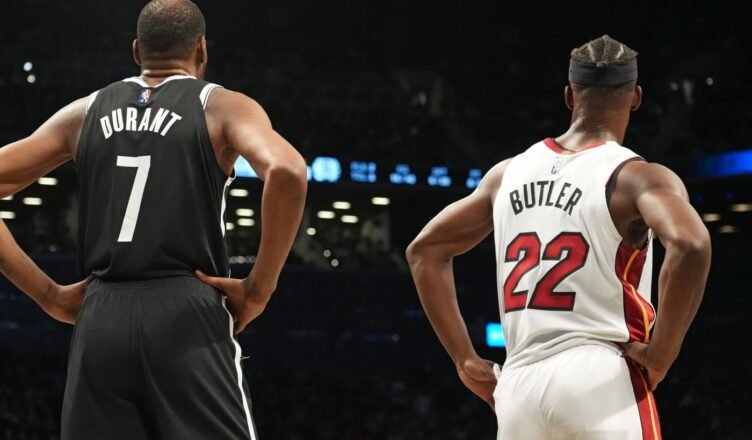 NBA free agency begins Thursday, June 30th. And there is a lot of drama (big surprise) up in Brooklyn. Kyrie Irving’s cancerous ways have metastasized yet again.  He has, reportedly, a “six team list” of teams he would play for if contract talks with the Nets fall apart. And they might. The Nets would be fools to cater to his “delusional” demands.

As a result, reportedly, Kevin Durant is “considering options” during this latest kerfuffle.

So, as the domino’s fall, there is now chatter about Kevin Durant and the Miami Heat.

Should the Miami Heat trade for Kevin Durant?

The obvious answer is yes. But would that require letting Jimmy Butler go? Probably.

So should and / or would the Miami Heat trade Jimmy Butler for Kevin Durant?

They probably would. KD’s arguably the best player on the world.

So, yeah, the Heat would probably trade anyone on their team for Kevin Durant.

Should they? It’s a complicated question.

The heart says no. Jimmy Buckets is Heat Culture all the way — they were a shot away from the Finals — and watching Playoff Jimmy was absolutely exhilarating. He was the best two-way player in the Playoffs last year.

Would it be possible for the Heat to trade Kyle Lowry,  Duncan Robinson, and honestly, anyone else, and somehow keep Jimmy Butler, Bam Adabayo and still acquire Kevin Durant?

Hey. The Warriors acquired Durant and kept their core.

Time will tell but at the same time we may know sooner than we think.