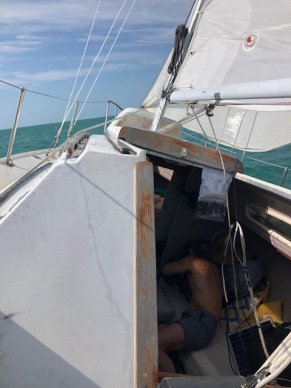 Smooth seas never made a skilled sailor. If that’s true, Saturday morning made me an expert.

I knew we had our work cut out for us the second a thirty mile per hour gust of wind nearly capsized my sailboat. 6.5 knots feels like you’ve broken the sound barrier on my boat and we were moving towards light speed. Thoughts of my three man crew floating on cushions flutter kicking our way to shore swirled around in my head. We figured out the main sail was pulled in too tight. We gave it some slack and found a pocket that had us heeling over just enough for cocktails. We pulled a sweaty bottle of prosecco out of the cooler and thumbed the cork off. Cheers! To the 2021 Miami to Key Largo Regatta!

For the uninitiated, a regatta is a sporting event consisting of multiple boat races. The Miami Yacht Club has been organizing this one for over sixty years. My approach to the regatta has always been that of an obese marathon runner, the goal is to finish. One by one, we watched all sixty five competitors sail past us until the parade was over. Now that the pressure was off, we could settle in.

This was my fifth time attending and second year sailing my own vessel, a 24′ sun worn Pearson built in 1985 with the words “Midlife Crisis” fading off the sides. It would be slightly misleading for me to claim that I know how to sail. If the conditions are favorable, I could fool anyone into believing I was born in the hull of a ship but the second something goes wrong, I’m looking at you. Self awareness keeps my heart rate steadily humming above 120 bpm while I’m at the helm. My fitness tracker confirmed this several times throughout the trip.

Things were going great until we realized why the other boats were sailing much further away from us. At first it seemed like we were all headed in the same direction, give or take a few degrees. As it turns out, a few degrees will put you in a different zip code. We were four hours in and 5 miles off course. No problem! This calls for a motor assist. Big problem! I have a 6hp motor and I need it to push a hydrodynamic elephant directly into twenty-five mile per hour winds. At full throttle, it felt like we were moving backwards.

When the estimated arrival time on my GPS went from 2:45 pm to 7:00 am, I asked my skipper to grab the tiller so I could lay down and breathe. WWJD in a chaotic situation like this? He would take a nap. I regained my composure by reminding myself of the worst case scenario, we quit and sailed back to the starting line. Luckily, the worst case scenario was not an option for us. We dropped the sails and crawled our way through resistance in the right direction, three hours later we were back on course.

After climbing Everest, what lied ahead of us was serene. A pleasant sub tropical breeze carried our laughter towards Manatee Bay where the rest of our party waited. Exactly twelve hours after we had unmoored, we arrived.