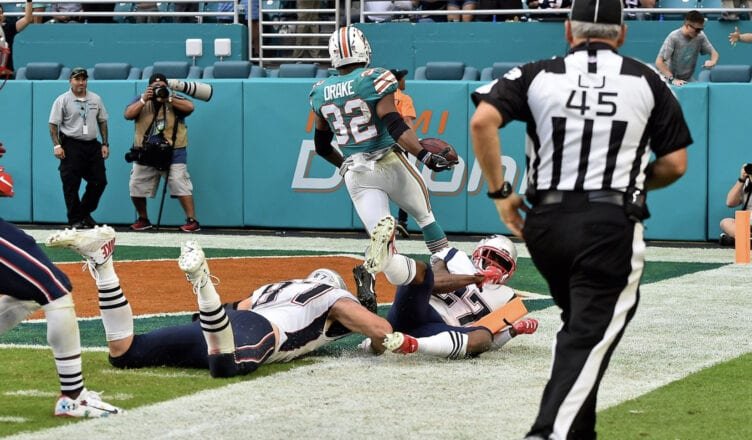 The 2010’s have been brutal for Miami Dolphins’ fans. With 7 games left to go in the decade, our home football team has a dismal 67-86 record. It’s been ten years of coaches doing blow on camera, offensive lineman bullying one another, and Ryan Tannehill getting sacked. But there has been one shining moment that will live on in Dolfans memories from this misbegotten decade, The Miami Miracle.

On December 9, 2018 the Miami Dolphins were down 33-28, with seven seconds to go, against the hated and seemingly invincible New England Patriots. But then The Miami Miracle happened. Tannehill took the snap, threw it to Kenny Stills, who lateraled it to DeVante Parker who then hot potatoed it to Kenyan Drake, who ran the ball 52 yards for a touchdown to win the game 34–33 with no time left. The play is bananas and worth another couple thousand looks.


Though as of this writing it hasn’t even been even a year since The Miami Miracle, a lot has happened since then. Here are some striking numbers.

329 – Number of days between The Miami Miracle and the Miami Dolphins’ next win.

Believe it or not the Dolphins were in the playoff hunt after The Miami Miracle. At 7-6, they were tied with the Ravens, Colts, and Titans for the last playoff spot. If the Dolphins would have won their last three games they would have made the 2018 playoffs. They proceeded to lose all three of those games along with their first seven contests of the 2019 season.

13 – Number of New England Patriot wins since The Miami Miracle.

The Patriots lost the week after the Miami Miracle to the Steelers. But after that the Pats managed to rip off 13 straight wins including Super Bowl LIII. Coincidentally the Patriots’ 13 game winning streak was snapped the same day as a Dolphins ten game losing streak on November 3, 2019.

1 – Number of players involved with The Miami Miracle still on the Dolphins roster.

Quarterback Ryan Tannehill was shooed out of Miami to lead the Tennessee Titans to one of his trademark  7-9 seasons. After criticizing Stephen Ross and Jay-Z one too many times wide receiver Kenny Stills was dumped to the Houston Texans. Kenyan Drake was pawned off to the Arizona Cardinals for a sixth round pick. That leaves only DeVante Parker as the one participant in the Miami Miracle still wearing a Dolphins uniform.

43 – Number of points the Patriots beat the Dolphins by the next time they played in Miami.

On September 15 the Patriots returned to the scene of the Miracle. Back in Miami which has been the toughest place for their quarterback Tom Brady to play, the Pats made sure that lightening could not strike twice. They spanked and blanked the Dolphins to a 43-0 shut out. Ah well, there’s always next decade.