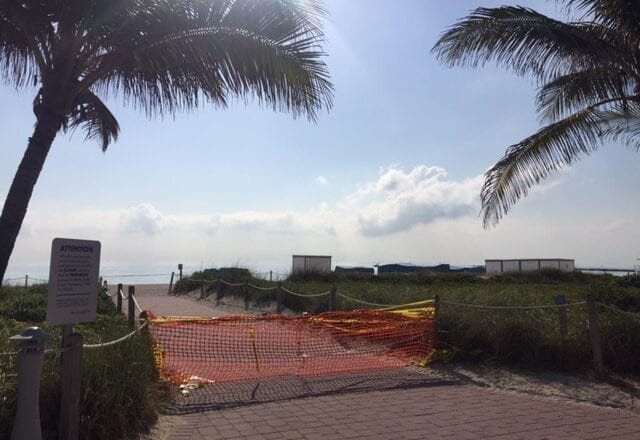 It was March 18 when Miami-Dade closed all beaches and parks. So it has been barely six weeks since we could dive into the ocean or bury our feet in the sand.

And the natives are getting restless.

People have hired planes to carry banners with private messages to Miami Beach Mayor Dan Gelber  that read, “Please open the beach Dan!” Cars are parked along the shoulder of the Julia Tuttle Causeway, to get a taste of a coastline that was once only good enough for sex offenders.

Access to a beach, any beach, is something we now realize we took for granted.

Caution tape and signs warning of $500 fines and 60 days in jail block the pathways to the sand. But more and more people are willing to risk the consequences. Early morning surfers brazenly hop over the orange tape willing to risk a reprimand or arrest from the newly deputized lifeguards.

Over the last week beaches have reopened in Northern Florida and California. But we’re told those in South Florida can’t handle their beaches. Anyone who saw the raucous hedonism of the early days of quarantine, might tend to agree. But those were all Spring Breakers descending on our beaches from other lands.

And it is because of them that we are told we must wait until June for our beaches to re-open.  Not because any vaccine will be available then. But rather because they can cancel Urban Beach Weekend without the stench of racism.