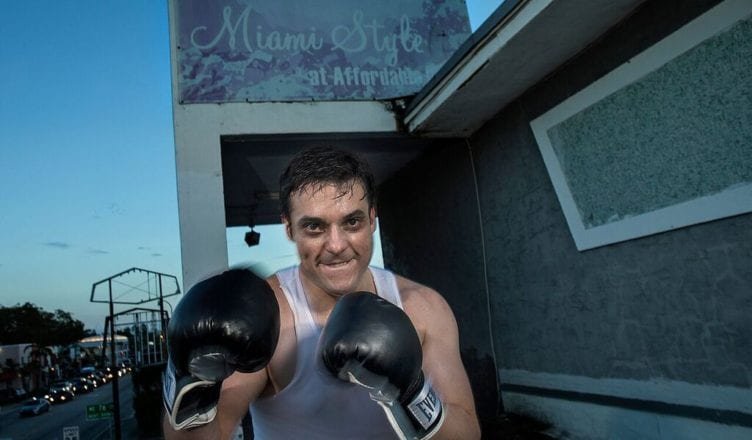 Miami Motel Stories, produced by Juggernaut Theater, just launched the most ambitious immersive theater experience ever in our Magic City.

Building off last year’s successful Little Havana romp, this year they took over the abandoned Gold Dust Motel on 77th Street and Biscayne.

In Miami Motel Stories, 9 hotel rooms are converted into basically 15-minute one act plays. They range in time periods, plot, nuance, and genre, but they have one thing in common, a motel in Miami on Biscayne Blvd.

Patrons are assigned a key, blue, yellow or white, and each guest is guided by a bellhop through three one-act immersive plays. You are part of the show. To see all nine plays, you would need to come back three times, which is almost impossible — the show is only running for a month, and most of the shows are already sold out.

After watching three plays, guests are led downstairs and out back where there is a free-for-all romp through another six immersive experiences. We had the blue key and these were the premises.

1. It’s 1963 and a CIA agent shakes down a disgraced Veteran from New Jersey with visions of grandeur.

2. It’s 1983 and a local aspiring singer is hiding out in the room covered in blood.

Downstairs, there was a bookie in 1957 running a casino. If you beat him in Blackjack he gives you a shot of whisky. There is a wise ass bartender stuck in a time trap, a diner circa 1965 filled with beatniks and feminists. Then, a Haitian fisherman is on a canal — casting a rod will earn you a beer. There is also a real estate speculator circa 1984 wanting to clean the Blvd up from immorality. And one we missed featuring the hotel owners’s wife.

The whole show had the audience immersed in the action. The show really came to life as it progressed. Older crowd, mature, but fun.

At first, Miami Motel Stories might have bit off more than they could chew. Like the check-in process was slow and discombobulated.

If you get there early, there’s literally nothing to do but sit in this tiny lounge with zero activation. No drinks, no music, just one couch and some vintage pictures on a wall. It was kind of spooky.

Think they factored “Miami time” into their equation.

But after the whole experience, you leave feeling one hundred percent satiated.  With over 30 actors in the troupe, Miami Motel Stories executed a large task with precision, talent, excellent writing, amazing costumes, set design and most of all, class.

This troupe is a Juggernaut for a reason.