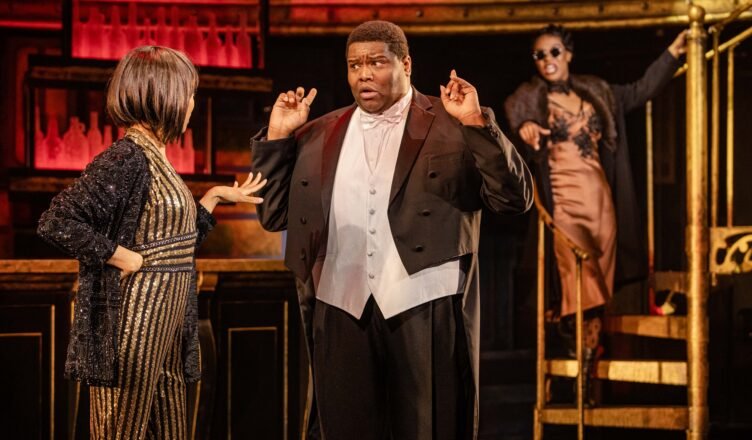 The world premiere of Miami New Drama’s A Wonderful World finally opened this past weekend at the Colony Theater on Lincoln Road.  The opening, delayed 638 days due to Covid-19, attracted many Miami elites, including County Mayor Daniella Levine Cava. It’s agonizing to type, but it was worth the wait.

A Wonderful World is a full-blown theatrical production worthy, better even, then many plays currently on Broadway. Including musicians, the cast consists of 28 members. The epic 2.5 hour two-act four-part production features 44 songs covering the entire professional life of one of America’s legendary icons and founding father’s of jazz: Louis Armstrong.

Louis Armstrong, played by Juson Williams with finesse, swagger and depth, is an extremely powerful figure in 20th century Americana. As of now, no one has produced his story in film. Although, Ron Howard and Brian Glazer are working on it for Apple TV and Tracy Morgan is self-financing a project.

Miami New Drama and its artistic director Michel Hausman beat the world to the punch with A Wonderful World and it couldn’t be better.

Written by Miami-born Aurin Squire (This Is Us, Evil, The Good Fight), the story is innovatively told through the point of view of Armstrong’s four wives.

It’s roughly the years 1916 till 1923 until a lynching of a bandmate triggers Armstrong into a self-imposed exile to Chicago. Here we meet Lil Hardin, astutely  portrayed by Allison Semmes. She navigates us through a wonderful period in American history, Chicago during the Roaring 20s and Prohibition.

Lil Hardin, a classically trained pianist, was an important figure in Armstrong’s life. Not only a musical collaborator, she was an expert marketer and visionary, dripping in confidence and glamour. Arguably, she made Louis Armstrong into the icon he would become. And the rest, as they say, is history.

The play is epic in scope and production. The actors swing through every scene, directed pitch perfectly by Christopher Renshaw. Rickey Tripp’s choreography hits every key with tempo and tenor. The play strikes a colorful visionary chord with its production & costume design, thanks to Ari Fulton, Steven Royal and Adam Koch.

A Wonderful World is the best original play South Florida has seen in awhile. It is absolutely a gem and one can only hope its next stop is Broadway.

See it if you can.

This cultural gem will make you proud to call Miami home.

Tickets & info for A Wonderful World, playing through January 16th at the Colony Theater on Lincoln Road.

A Wonderful World – An Epic New Musical from Miami New Drama on Vimeo.