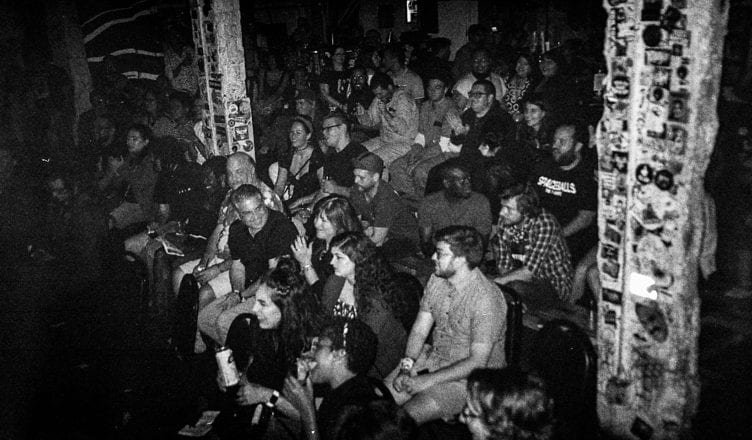 Dan “Gonzo” Gonzalez and Andrew Schwartz  are local filmmakers and writing partners. Last year, after struggling  to find eyeballs for their films, they started a little DIY film festival. In only its second year, the Miami Underground Film Festival is already making a dent in our local culture. This event truly exhibits the old maxim as it applies to artists, “many are called, few are chosen.”

We caught up to the creators of the festival for an in-depth look and insightful take on modern film making.

Tell us the background for your festival?

Last year, we made a bunch of silly graphics, put out a call for entries, and got a good response in a surprisingly short time. We knew that Miami was full of talented people, we just didn’t realize how hungry they were for an alternative outlet to show off their work.

So, how many submissions did you actually receive? Like a couple hundred?

Despite making it very clear that we only accept films from local filmmakers–the idea is to be a showcase for South Florida, a celebration of what makes our area unique–we received thousands of submissions from every corner of the world. After disqualifying all of the entries from apparent illiterates (or just cynical rulebreakers hoping to sneak one past us), we still had nearly 100 local entries to watch and narrow down to 21 short film entries and a handful of music videos.

This year we tried to make it even more clear that we ONLY accept submission from South Florida filmmakers and even required a password to submit. Nevertheless, we still received hundreds more entries from all over the world, though thankfully fewer than last year. On the plus side we received more entries this year from actual Floridians, with about 120 submissions from filmmakers ranging from the Florida Keys to the I-4 Corridor.

The vast majority of the films are from Dade and Broward so the 305/954 is fully represented, but we also have some gems from Ringling graduates in Sarasota as well as entries from UCF and Tampa to give a more complete picture of all the different groups and experiences that make up South Florida.

When curating the films to include, do you try to balance them by genre? Walk us through the selection / curating process.

Yes and no. If we received nothing but horror films, we’d show all horror films. It we received nothing but spy genre entries, that year would be espionage themed. We want to represent the art that’s being produced by the local film scene, regardless of how lopsided or unbalanced it may be. Miami’s a peculiar and unique place. “Balanced” is not a word I’d pick to describe it. Fortunately we receive a broad variety of film genres and that’s reflected in the programming.

We watch every single qualifying entry before making any selection decisions. Then, we mark them as Yes, No, or Maybe on the first screening, then go back later and review all of the Maybes. We repeat this process until the final roster has been decided. It takes us several months to complete.

If two or more films strike us as too similar to each other, we might pick the best one and reject the other(s), especially if we’re short on time. When two films approach similar subject matter in completely different ways, however, we’re more likely to show both because we appreciate the contrast.

For example, two of our films this year happen to center on fish as MacGuffins that drive the plot. Fish (dir. Jonathan Gill) is a comedy about a petty criminal who is cursed, King Midas-style, to see everything he knows and loves turned into Swedish Fish candies.

His Name is Kenneth (dir. Jokes Yanes) follows an isolated and emotionally scarred young man as he mourns the loss of his only friend, a pet fish. We loved both entries for entirely different reasons.

What do you say to the losers? We’re curious if you have a template rejection. As novelists, we are used to rejections and have learned how to savor a fine rejection.

Try again next year. We want to encourage creative growth while still maintaining a baseline standard for acceptance into the festival.

Why Churchill’s for a film venue? Seems weird, no?

It’s a versatile venue with longstanding local credibility. And we were happy to work with a club that could accommodate both film screenings and live musical performances.

Any final thoughts on anything whatsoever?

Yeah, I wanted to clue in people to the format of the Miami Underground Film Festival. We start with a pre-show screening of music videos from local artists that lasts about 20-30 minutes, then we announce the main event.

When everyone is seated or comfortably standing and reasonably quiet, we show the films on the big screen in the main room. This lasts about four hours. We then present the irreverent Circle-Jerk Awards ceremony, complete with appropriate trophies.

After that the bands play on the stage in the main room. Meanwhile a second screening of all of the films begins in the smaller Green Room in the back of Churchill’s, allowing the later crowd to enjoy the films and anybody to catch films they missed earlier.

It’s a fun way to spend a Saturday.

You should definitely come and bring all your friends with you. 5pm, June 22nd at Churchill’s Pub in Little Haiti.