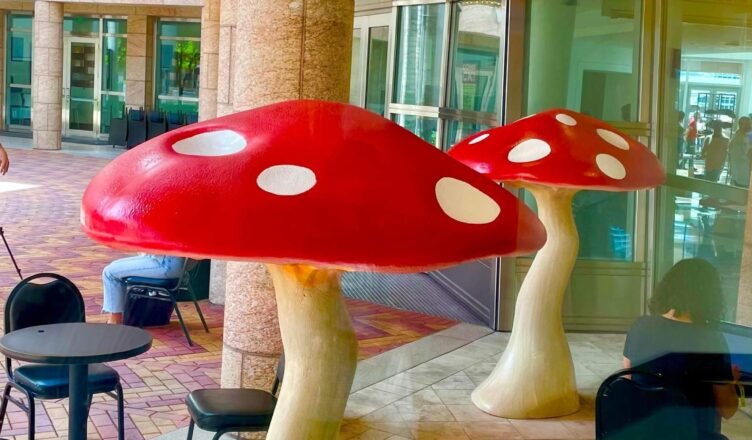 Monday morning on the Metrorail, somewhere between Dadeland South and Dadeland North when the Magick Miami Mushrooms began to take hold.

Suddenly there was a horrifying roar all around us and the sky was full of what looked like huge pterodactyls: swooping, screeching, and diving around the Government Center station.

I am on my way to Microdose Wonderland Miami  at Adrienne Arsht Center, billed as: “The largest psychedelic medicine business event, ever.” And wait…there’s more! Mike Tyson and Lamar Odom are guest speakers?!

I had ingested the entire psilocybin chocolate bar about 6 am and it felt like I was peaking already.

I realized that I hadn’t changed the time on my watch and it was still an hour ahead… or was it?  Snaggle toothed junkies waited like sharks at the bottom of the escalator as I went down. Did I pee in my pants…or does this whole Metrorail station smell like piss? Rat Bastard and Kyle were already at the Arsht Center texting things like, “This better be good…”

Rat is on speakerphone telling me to take the “People Mover” while I admire the historic Claes Oldenberg Orange Peel sculpture. Out of nowhere, an old-fashioned yellow cab pulls up and well…Fuck it, I got in. Cars blaring hideous music pass by.

“Take me to the Adrienne Arsht Center!”

By the time I jumped out of the cellophane taxi on 14th and Biscayne around 11am, Mike Tyson was preparing to speak in front of a full house about the mental benefits of tripping shrooms. Press registration was already underway outside the “Ah- Shits Center”, and we still could not figure out what the hell kind of event this was. 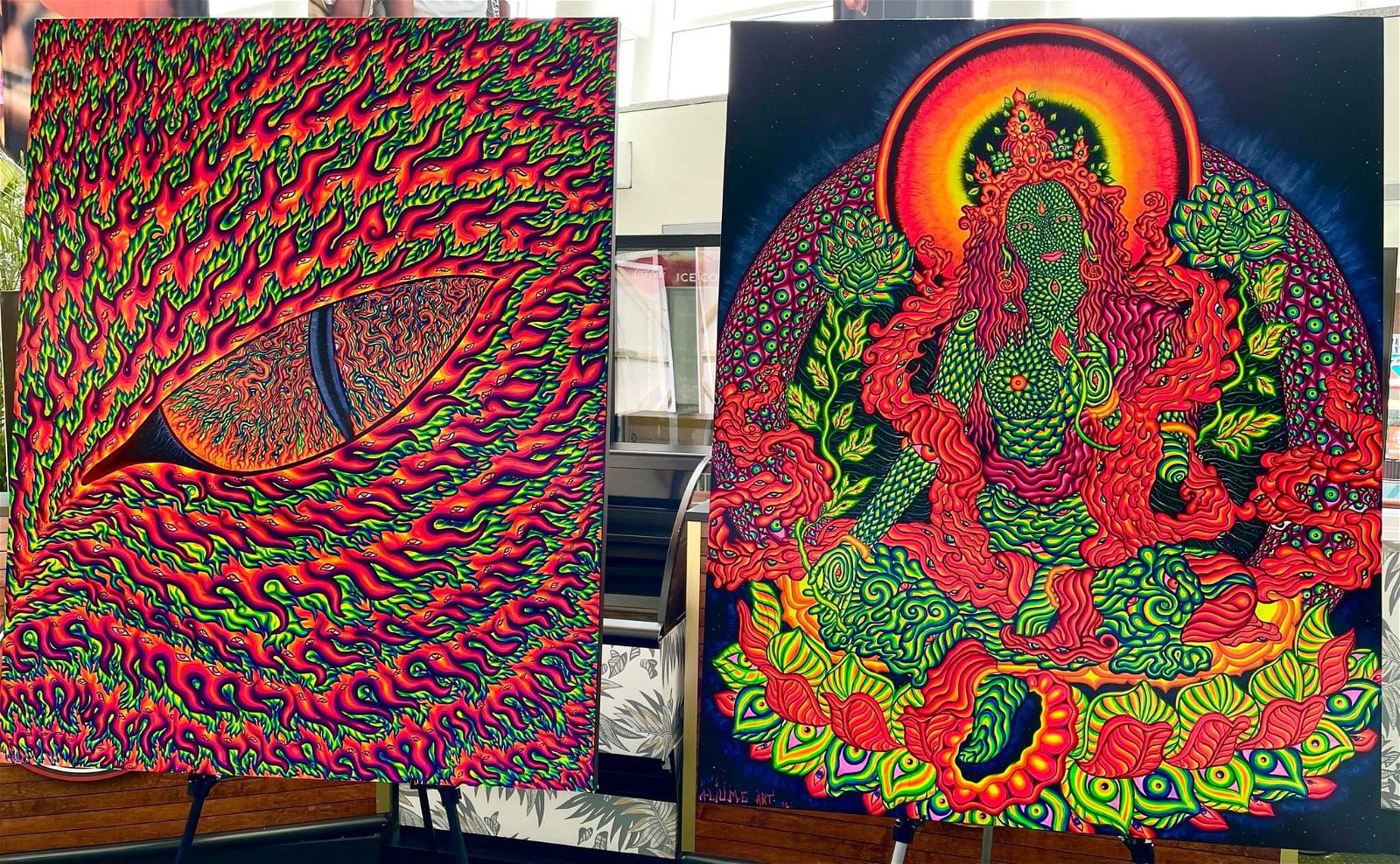 “That’s the press table,” said a strapping young lad in a white Microdose Wonderland T- shirt and blue jeans. “That’s where you have to sign in for credentials.” There was a small line for “Instant Results Covid Testing”, and they were giving out mandatory masks.

A turban wearing Sikh from Dubai handed me his card. A bearded middle-aged man from Holland, wearing a Grateful Dead baseball cap handed me a pair of 3-D glasses to put on. “Vatch the blinking lights and glowing svirls,” he smiled. A thin Caucasian woman cloaked in a Peruvian blanket escorted us to these soft yoga mats surrounded by small crystals. She muffled my head with foam glasses connected to headphones. Rat, Kyle, and I lay next to each other listening to soothing New Age meditation music as Rat babbled, “This reminds me of that time I was a little kid stuck on the ferris wheel at the county fair… Grand Funk Railroad was playing live…”

We walked past the main auditorium and caught a glimpse of Mike Tyson onstage, sitting below a gigantic monitor with his face on the movie screen…which motivated us to sneak upstairs towards the balcony like shadows into a “VIP Area”.  Rat pointed at something, “We are sitting in the $1499 ticket section,” he continued, “there has to be free drugs or at least free beer around here.” 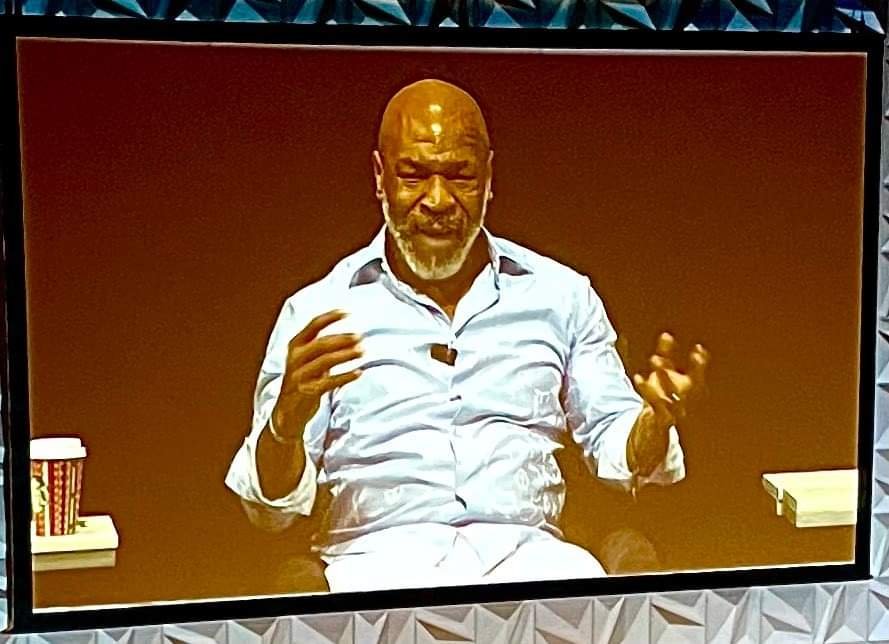 I put my hood over my head and leaned forward to listen to Mike Tyson. I love Mike Tyson. I had emailed several interview requests to his publicist over the weeks prior to event.

I look down at my notepad and for some reason it says, “MIKE TYSON FOR PRESIDENT!” Pen in hand I turn the page and scrawl, “If Donald Trump can be President, I hereby assure you that Iron Mike Tyson aka Kid Dynamite would spread love around the world like a messiah. The New Aeon would begin! There would be NO MORE WARS IF MIKE TYSON WAS PRESIDENT OF THE UNITED STATES, AND I CAN PROVE IT.” I took a deep breath and was unable to write anything more onto the notepad. I was tripping balls.

“His best VP Candidate would probably be Ozzy Osborne,” I thought to myself. Most Americans love Mike Tyson and Ozzy.

We sat and looked over the balcony as Mike Tyson paced onstage.

“I am a psychedelic junkie!” he exclaimed with clenched fists. The filled auditorium burst into applause as the former World Heavyweight Champion settled into his chair on the large stage.

After that opening statement, honestly, it was hard to hear the GOAT. He was speaking softly, and the microphone was just not picking up his famous hit Broadway voice.

“I should be doing the sound here…this is terrible… I’m a Sound Engineer,” whispered Rat. I leaned over the balcony to hear better…

Mike Tyson was talking about how this psychedelic medicine has helped him overcome brain trauma from boxing injuries, depression, even suicidal thoughts. At one point he was holding back tears as we craned our necks to hear what he was saying.

He discussed how a company he reps, WESANA has created these new psychedelic treatment facilities where patients are monitored and the goal is FDA approval of psychedelics for athletes, veterans, and others with PTSD, suicidal depression, traumatic brain injury, etc.

There was a Q and A with the audience, but we did not get down there in time.

A man who claimed to be a Shaman asked Mike about the toad.

“The audience microphone is so damn loud but we can’t hear Mike Tyson,” said Kyle.

My phone was buzzing non-stop.

Tyson’s publicist emailed back, “What outlet?”

She replied, “I’m sorry he only has a limited time for certain press. Thx,”

I read the email on my phone as I looked at the real Mike Tyson, a stone’s throw away.

I was so blessed to be in the same room as Mike Tyson. He talked about the death of his ego using DMT, psylocibin, the toad, and other psychedelics… it was a win-win-scratch- that- one-off-my-bucket-list kind of day. Thank you Universe!

Rat, Kyle and I decided to leave and get pizza. We walked down the street where my BFF met up with us. 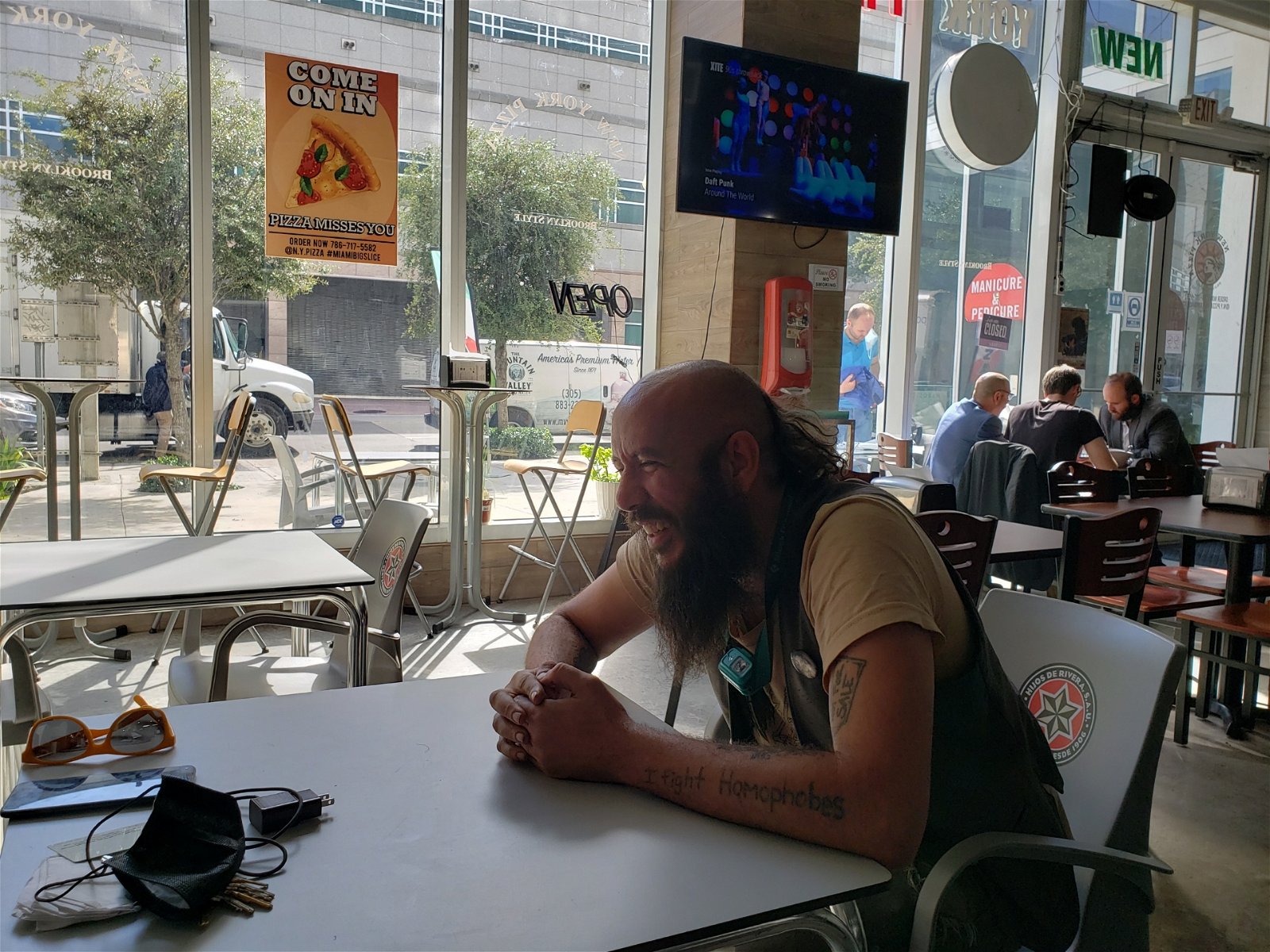 “This is where we first smoked crack 17 years ago. This upscale pizza place was a crack house and they had just started building the Arsht Center across the street.”

“They called this area New Jack City back in the day. I bought crack around here for GWAR back in the early 90’s.”