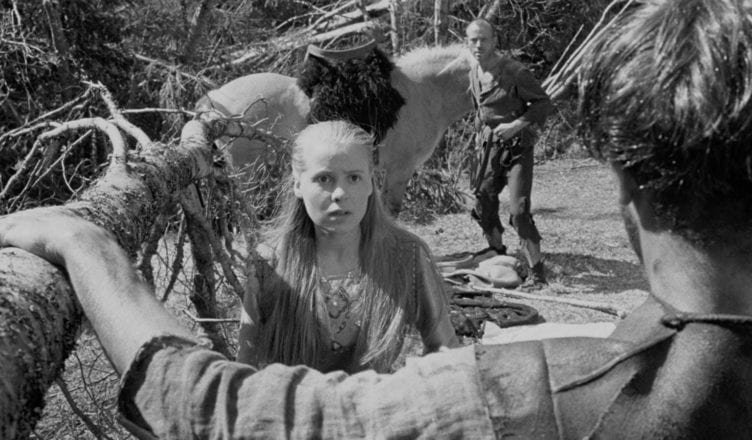 There are moments of genuine beauty in the new movie Midsommar. It features exciting, unique camera work. There are exotic locales, and you are taken to a world I can’t remember cinema taking me to before. That should be enough for any moviegoer. And it is. Midsommar is a worthy viewing experience for anyone without a squeamish stomach.

But there was a moment when Midsommar seemed it might be transcendental. Early in the movie we are introduced to a character named Ingemar. Among the picturesque scenic hills of Sweden and after an amazing trick of the camera where the screen flipped and we watched a car driving on a road from an upside down perspective, I thought the character might be a nod to the Swedish master of film Ingmar Bergman. During that moment I was ready for Midsommar to be a deep, powerful movie worthy of  Bergman’s name.

I don’t think it achieved such hallowed heights. Though it might have. And that such a discussion can take place is a credit to Midsommar‘s filmmakers. But after much consideration I think at its heart Midsommar is actually a schlocky horror film dressed up as a work of art.

The movie starts off with an unimaginable tragedy. It then follows the familiar horror trope of five young, mostly attractive people taking a trip into the woods. These woods are in Sweden and its citizens prove to be sadistic enough that I believe the Sweden tourism board could sue the filmmakers for affecting their economy. The Americans have come to bear witness to a festival held every 90 years. The rituals quickly prove to be as deranged and brutal as we imagine the past to have been.

There was much to impress in Midsommar, especially on a technical level. Many of the shots are brilliantly and memorably composed. Some of the transitions from scene to scene are cleverly edited, but the major flaw is in the characterizations of the Americans. It doesn’t get quite to the level of causing viewers to yell at the screen, “Don’t go in there, you idiot,” but it gets close.

But there was enough creativity to this movie that I am willing to accept I could be wrong. Perhaps Midsommar is a masterpiece. And one day in the far future a movie will feature a character named after Midsommar‘s director as a means to signify depth and intelligence.