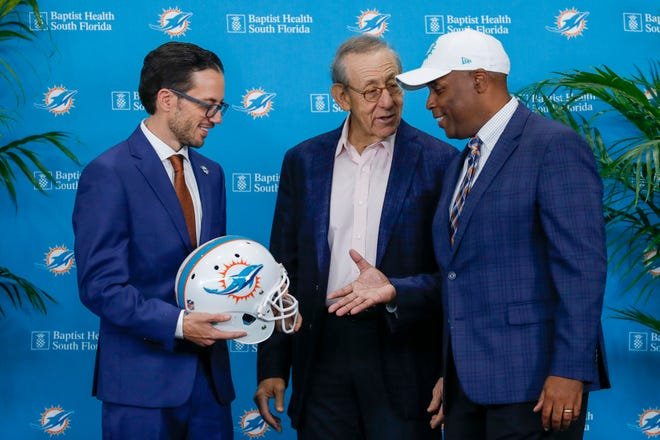 Last month the football world was shocked when the Miami Dolphins fired head coach Brian Flores. While the Dolphins failed to make the playoffs during Flores’ tenure, they overachieved all three seasons including having the franchise’s first back to back winning seasons in nearly twenty years.

Dolphins owner Stephen Ross said his rationale for firing Flores was, “”Well, I’ve been looking at this over three years now and watching the organization grow. I think an organization can only function if it is collaborative and it works well together. I don’t think that we were really working well as an organization to really win consistently at the NFL level.”

Immediately after the firing it was reported by the Miami Herald’s Barry Jackson that the real reason Ross fired Flores was he didn’t kiss up to him enough. “It’s easier for Ross to keep the long-term employee with the pleasant demeanor — the one who treats him royally — than the only that’s perceived as difficult to work with,” the article said.

Soon after the firing, Flores famously sued Ross and the rest of the NFL for racial discrimination towards NFL coaches. The allegations included claims that Ross offered Flores $100,000 for every loss, which had many calling for Ross to sell the team.

But sadly for Dolphins fans Stephen Ross is going nowhere. Instead he doubled down and decided to hire a new coach for his Miami Dolphins.

Many thought Ross would hire an experienced coach in Jim Harbaugh, but once again the Miami Dolphins owner went cheap. For the fourth time in four coaching vacancies Ross opted for a man with no head coaching experience in Mike McDaniel. And McDaniel marks the second time Ross hired an offensive coordinator who didn’t call his team’s plays.

From the first question of Mike McDaniel’s introductory press conference it was obvious the reason he was selected as the Dolphins head coach. This is a man who is going to be really, really nice to Stephen Ross. Going from the presser Mike McDaniel is a man who will treat Stephen Ross royally.

The first question had Jim Barry asking McDaniel, “Did any of the issues raised by your predecessor in his legal action raise any red flags about this organization?”

This was a reasonable question since McDaniel’s predecessor felt so mistreated by Ross he made the unprecedented move of suing him.

In McDaniel’s answer he shamelessly flattered Ross in every way short of shining his shoes, “Red flags? I can honestly say there were no red flags. The reason why is  I was stepping into an organization with a boss that I don’t think people give his proper due. There’s a lot of people in professional sports that are out to make money. And I can’t lie. I feel like if I spent that much money I’d like to make a lot of money. When I walked in the door you look at every single detail within this building, you look at the people that are hired, you look at all the extents, there is no cost too high for winning for him,” McDaniel said not acknowledging the irony of this statement about a man who is accused of actually paying his coaches to lose.

McDaniel continued, “The city of Miami really is lucky to have an owner that right wrong or indifferent all he cares about is winning. And as a coach that is literally all you are looking for. That is all. So red flags? No, there’s no red flags for me.”

As a long suffering Dolphins fan I truly hope McDaniel can be a better coach than he is a public speaker. But one thing Stephen Ross guaranteed himself with this hire, he found a new best friend.