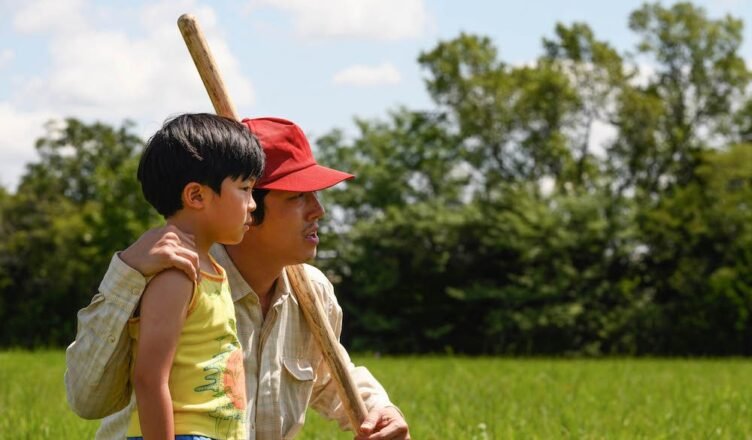 Minari is one of those hyped up movies. Critics are losing their shit for it. It’s currently at 98% on Rotten Tomatoes.  It even won best foreign picture at the Golden Globes. Well, I saw it. I dug it. And yeah, at the risk of more self-loathing…no, I won’t say it. This one is solid, and I’ll take good any day.

The movie’s set in the ’80’s, but not garishly so. It took me a good fifteen minutes before I even realized it. There are no obvious (or any, really) ’80’s needle drops and even the fashion is, for the most part, pretty tame. It helps that the movie’s set in rural Arkansas, not exactly the epicenter of haute couture and music. The story follows a family that’s uprooted themselves from California so the father can pursue his dream of becoming a farmer.

His dream, though, might be more of an obsession.

But it’s an obsession born out of relatable desperation. Jacob and his wife, Monica, work at a hatchery. They sift through baby chicks, separating male from female. You don’t want to know what happens to the male chicks (…why am I not vegan again?) As Jacob watches the black smoke rise from the incinerator, his 8-year old son, David, asks him why they suffer such a fate. Jacob, staring at the billowing fumes, replies something like, “that’s what happens when you’re useless.”

Farming is Jacob’s absolution from staring at “chicken’s asses all day,” a chance to do something meaningful with his life.

The question is, at what cost? His ambition comes at the price of his family’s misery. He moves them to a long trailer out in the middle of nowhere, its nowhere-ness nicely established by the opening credits, which have Monica following Jacob off the beaten path, and even further until there is no path, and further until they finally reach the beige rectangle sitting in the middle of tall grass that they’re supposed to call home. Monica’s expression at the sight of it says it all. You moved us here for this?!

The movie is mostly seen through the eyes of little David and the story, as you might expect, plays out in vignettes as the family tries to acclimate to their new home while Jacob attempts to get the farm off the ground.

What surprised me about the film was its humor. Some of it is obvious, like Monica’s grandmother, who comes to live with them and whose demeanor comes close to Vanessa Redgrave “Hauling ass to Lollapalooza” territory. Some of it, though, reminded me of Roberto Benigni’s eternal patience in setting up a gag early and letting it come to fruition much later. References are made to Mountain Dew early on. David loves it. Grandma loves it. It seems like an 80s detail at best and product placement at worst. Eventually, about half-way through, Grandma asks David to bring her a glass of the soda, but David, who hates grandma because he has to share his room with her and because she’s not a “typical” grandma, has other plans, and, well, I’ll let you see what happens for yourself. It’s crude, but it’s so well set up and played out that I laughed.

Yeah, some of the movie is dangerously twee, but it tends to back off at just the right moments. There’s a dash of Little Miss Sunshine kookiness for kookiness’ sakes, but it’s more sufferable than in-. The characters aren’t just caricatures, parading around the movie just to be weird.  Grandma isn’t simply a foul-mouthed gambler, and Will Patton’s Paul, who helps Jacob on the farm, isn’t just a babbling religious fanatic. There’s a warmth and multiple facets to most of the film’s characters.

Of course, this being an indie drama, that humor dissipates by the third act. It is kind of typical in that way and maybe that’s why I’m more luke than warm towards the movie. It works well at being a mold rather than break free from it.

Minari still works, and I’m gIad I saw it. But I still bristle at the hype because I’m not sure if it’s a result of the film’s content so much as a love of its point of view.

You see, I left a little something out until now. Not because it isn’t important. It is. Jacob and his family are Korean American. Most of the movie is in Korean with English subtitles. That specificity brings a welcome viewpoint we don’t see often enough in American productions.

But, while the Korean viewpoint is important, the universality of their experiences is also.

Interestingly, the Korean experience presented in the film doesn’t go down the path I expected. The Arkansas community seems to welcome the Yi family warmly. Though maybe the wives harping around Monica and cooing , “Oh, aren’t you just the cutest thang” is just racial condescension. But if the movie is praised more as some kind of a woke flex than for its actual content, isn’t that condescending also? Because the content here is good, but, ugh, I’m getting nauseated just thinking about writing it, it’s not that good.

Raya and the Last Dragon

Disney’s newest animated offering, has a few things going for it. It’s an original creation (but don’t confuse that with being original) not based on previous intellectual property. It has a strong voice cast and a nice message. And it has the colorful cg sheen you’d expect from a Disney product. But it’s just that. A product.

Raya and the Last Dragon takes place, for once, in a fantasy world without British accents. The world of Kumandra draws heavily from Southeast Asian cultures, but the story is typically Disney: A hero’s journey that imparts a message of peace and coexistence.

500 years ago, humans and dragons lived together, but that peace was broken by generic purple cloud monsters called the Druun that turn every living thing they touch into stone… you know what? I’m going to skip this plot stuff. No matter how bombastically it’s presented in the movie (with typical 2D scroll art and a bombastic score by James Newton Howard, no less), this is all rote fantasy stuff. What you need to know is that the titular Raya (Kelly Marie Tran) and the equally titular dragon, the talkative Sisu (Awkwafina, charming as always), embark on a journey through five different kingdoms to reunite a magical MacGuffin that’s going to unstone the stoned and bring peace to their land. An ersatz family is created on the way as they pick up new allies in each land. Lessons are learned. Everybody’s happy. Cue the fireworks.

Raya is pretty, but pretty generic. Everything in this story exists as allegory meant to inform rather than titillate the imagination; it’s less world building and more lesson learning. Landscapes are appropriately lush, but not terribly memorable. The way the dragons are envisioned is cool though. They’re furry, more slinky than angry reptile and they can’t fly, at least not with wings. Instead, they create colorful steps out of rain drops and basically run through the air during a storm. Other than that, the movie doesn’t tax the imagination. The best the filmmakers come up with is “toot and boom” bugs whose farts are explosive (y’know, so the kids will laugh).

There are a couple of fight scenes (y’know, so the adult will be excited). They’re short, not sweet. It seems like the moment you make a movie with Asian themes, martial arts must be involved. Such rich and varied cultures, yet somehow Asian always equals “Kung Fu” in American movies.  I love martial arts movies, I just cheered through Jimmy Wang Yu’s The One-Armed Boxer from 1972 the other night, but here it comes off as reductive. And because it’s a Disney product, you know it’s not included because of a love for the genre, but as a calculated scheme to pander to as many demographics as possible.

I probably wouldn’t be so critical if the fight scenes didn’t feel like an afterthought. The biggest problem is that the story is tied so closely to “we shouldn’t fight” that the fighting can’t be enjoyed when they do; we feel bad when these characters come to blows.

It doesn’t help that martial arts in CG animated movies almost always look like rubber people boinging around the screen. Raya is no different. The fighting’s too smooth, no impact. While I suspect the choreography is intricate, it doesn’t matter because the virtual camera is always zooming and swishing around the action and the animation is just boing, boing, boing.

The voice acting is good, though. Kelly Marie Tran is great as Raya; bold, energetic. After being unceremoniously dropped from the last Star Wars movie, it’s nice to see her rebound here. She even sells some of the terrible dialogue she’s saddled with. “Oh, you know, bling is my thing.” That’s right, ancient world, modern slang. I don’t mind. Fantasylands don’t have to all be filled solely with portentous proclamations, except it’s only here to y’know, entertain the tweens in the audience.

And is it just me or is there some queer coding to Raya’s scenes with her antagonist, Namaari (Gemma Chan), a friend turned enemy in less than five minutes? Raya seems especially hurt that Namaari turned on her, but there’s also something about their awkward banter that sounds more like terrible flirting than anything else. And, fuck, if there’s anything I know about, it’s terrible flirting. So, if it’s there, cool. If I’m imagining it, I wish it were there. But again, is it there just to, y’know, appeal to a gay audience, and is it subtle so as not to offend conservatives (read: assholes)?

That’s the thing, everything about Raya, even the stuff I liked, feels too calculated somehow. Like a pretty but toxic plastic sheen enveloping what wants to be a robust heart.  I found myself questioning everything. Is this here because the filmmakers had a passion for it or because some exec wanted to appeal to the largest demographic? The fact that the movie has eight people listed in the “Story By” credit and four friggin’ directors convinces me of the latter.

It’s great that we have an American movie with a primarily Asian cast and mythology. And the central message is a good one too. There are no bad guys. We’re all one. We gotta work together. Hippie-dippie stuff that I deride in public as saccharine, but secretly gives me the warm and fuzzies inside. But is it worth $30 as part of Disney+’s Premiere Access or a trip to a disease infested movie theater? No way. Wait ‘til June and check it out for yourself when it becomes available without the extra fee on Disney’s streaming service. You’ll probably still feel a vague disappointment but at least it won’t have anything to do with blowing thirty bucks on the movie.