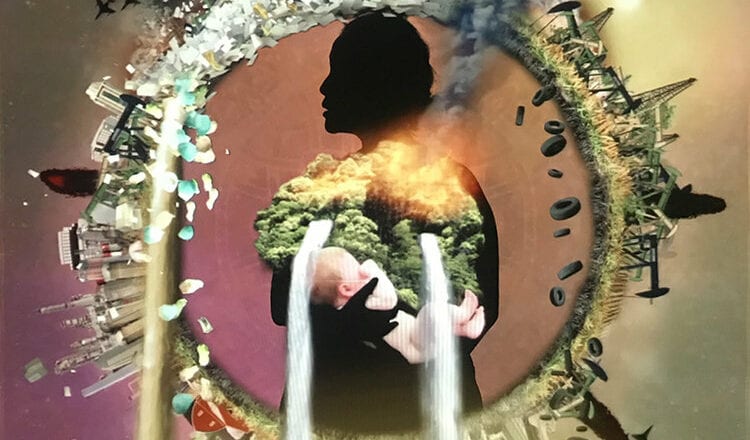 As a graduate student at CalArts, Miwa Matreyek was ready to  embark on a life as an animator. Then she said something unexpected happened, “I was all set to make short films for animation companies, then I started collaborating with theater students. I found it really effective being in an experimental space with students using theater, puppets, and magic.”

She began creating a new art from, one that she hadn’t seen anywhere else where she merged her animation know how with performance art. “People compare it to shadow puppetry. It touches on both animation and live theater. If you watch a filmed version it wouldn’t give you the connection  it does for a live audience.”

South Florida will have a chance to witness Miwa Matreyek’s work in a live setting when she performs both Infinitely Yours and  Myth and Infrastructure on November 15-17 at MDC Live Arts Lab. Both works have Matreyek in silhouette interacting with animation.”These are two pieces from ten years apart,” Matreyek explained. “Infititely Yours is from ten years ago. It’s fantastical, imaginative. Myth and Infrast ructure  is not quite complete. It’s kind of a preview for the premiere in January.”

She says Myth and Infrastructure is ninety percent on the way to being a finished work. She’s having some trouble striking a balance between dealing with a heavy issue like environmental apocalypse and giving people a little bit of hope. “The ending I currently have is a little intense. It’s a little too doom and gloom. I want to take it to a slightly more hopeful place.”

Matreyek aims for her performance to be open to different interpretations. “This looks at different aspects of climate change. Americans create so much trash we don’t ever see. I try to embody in this what it means to create trash and all the things that don’t get reused. I hope people leave thinking about how trash has become part of our daily lives.”

And so instead of being one of thousands working behind the scenes at Pixar or Dreamworks, Miwa Matreyek takes the stage and presents a one of a kind genre of animation.