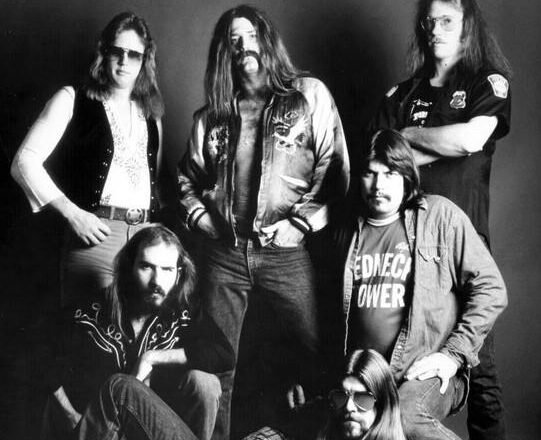 Jacksonville made a name for itself in the world of music as the motherlode of so-called southern rock. Several notable groups emerged from the city in the late 1960s and early 1970s including the Allman Brothers Band, Lynyrd Skynyrd and many others. However, by the late 1970s, the ABB had fallen into in disarray and had broken up, and Skynyrd suffered what was then seen as its demise due to a 1977 plane crash.

A year after the crash, a new Jacksonville group calling itself Molly Hatchet—named after an apocryphal prostitute who murdered her clients with an axe—exploded onto the worldwide music scene. Leader-guitarist Dave Hlubek had lived in the same blue-collar, Westside Jacksonville neighborhood and had gone to the same schools as many of the Lynyrd Skynyrd boys.

Hatchet had been recommended to talent manager Pat Armstrong, who had co-managed Skynyrd before that group got its big break in 1973. Armstrong too was from Jacksonville but by 1970 had relocated to Macon, Ga., widely considered the home of southern rock because it was the headquarters of Capricorn Records and its premier act, the Allman Brothers Band.

Armstrong had also been offered management of 38 Special, a group led by Skynyrd singer Ronnie Van Zant’s younger brother Donnie. Armstrong passed on 38, but someone in that group thought he might be interested in Hatchet.

Armstrong signed with Molly Hatchet as the group’s manager, executive producer and publisher. Wearing all three hats was a serious, yet common, conflict of interest; still the group signed his contract enthusiastically, in spite of the fact that the members had engaged one of the top entertainment law firms in New York to review it. Either the group’s attorneys did them a great disservice or—more likely—the group simply ignored their advice.

Armstrong got in touch with Van Zant, who was by this point well-ensconced in the music business and looking for other acts to mentor and produce. At Armstrong’s behest, Van Zant and Skynyrd sound man, Kevin Elson, traveled to Daytona Beach to see Hatchet perform. The relationship got off to a rocky start because Hatchet played a song, Gator Country, that poked a bit of fun at Skynyrd.

Still, Van Zant and Elson agreed that Molly Hatchet had something.

Van Zant brought Hatchet into Skynyrd’s studio on Riverside Avenue to record some demos and helped them clean up some song arrangements. The plan was that he would use his connections in the music business to shop Hatchet’s demos to record companies. If a deal transpired, Van Zant would come aboard to co-produce Hatchet’s debut album.

That opportunity was dashed by Skynyrd’s plane crash in October, killing Van Zant along with five other passengers. Hatchet’s big break went up in smoke.

Still, the group managed to snatch victory from what seemed like defeat: The loss of Skynyrd left a huge hole in the southern-rock market. Armstrong guessed—correctly—that several major labels were in search of a Skynyrd substitute to satisfy the demand for redneck rock, and being from the same city as Skynyrd gave Hatchet a leg up on the competition. The group even incorporated a Skynyrd tribute into its live performances.

Armstrong snagged Hatchet an audition with Tom Werman, an Epic Records producer, who happened to be working at an Atlanta studio called the Sound Pit. Hatchet set up in the studio for a live audition. Werman loved the group and, grasping its potential for seizing the southern-rock crown, quickly signed it to Epic.

There were other Jacksonville-based contenders to be sure: 38 Special, whose lead singer was himself a Van Zant, and Blackfoot, with two members who had briefly been in Skynyrd. However, with its “three-guitar army” and dynamic front man Danny Joe Brown, Molly Hatchet looked and sounded more like Skynyrd.

With Werman at the helm, the group scored a hit album that quickly went gold. Hatchet’s second album became even bigger hit than the first, scoring double-platinum (all in all, Molly Hatchet managed to create four platinum albums for Epic/Sony). The group shot to the top of the music world. Things could not have been going better.

This would have been the point where most groups would work to consolidate their success, but it was exactly the point at which Hatchet started unraveling. With the sudden influx of fame and fortune, the members’ heads swelled uncontrollably as they began to destroy themselves—along with their careers. Not only did they piss away their hard-won success—and money—most of the members destroyed themselves in the process.

Cocaine seemed to be the most pressing problem,

Whether it was alcoholism, cocaine-induced megalomania, dain bramage or just bad judgment fueled by arrogance, most of the members—with the notable exception of drummer Bruce Crump, who was a health nut—seemed to be on self-destruct and proud of it. The topic of self-destruction even became song fodder: they wrote songs about it, such as Flirtin’ with Disaster, which was also the title of their biggest-selling album.

Just as the group’s career was hitting full swing, lead singer Danny Joe Brown quit to start a solo career, convinced that he was the main attraction. His illusions would prove to be ill-founded as his success as a solo act fizzled in short order. In fact it was an unmitigated disaster. His drug use and egregious behavior completely alienated his new band members—to the point where they staged a mutiny and walked out mid-tour. Brown was forced to finish his 1981-82 tour opening for fellow Jacksonville rockers Blackfoot with a pickup band he found in a local bar.

Ultimately, one of the group’s most fundamental blunders was that the members refused to create a corporation or establish any type of formal business structure or even an operating agreement; hence, if a member quit, there was no legal framework for a financial settlement. They would have to sue, but none did.

Every member, with the exception of guitarist Duane Roland, eventually got fed up and walked away from the group—and its joint assets—without so much as asking for a settlement. Even the founder of the group, guitarist Dave Hlubek, walked out. Nearly all of them at some point returned as salaried sidemen, having relinquished their positions as principals.

The last man standing, guitarist Duane Roland, inherited the name and the tour bus. But Roland no longer wanted to tour due to a hip replacement and dependence on pain pills on top of his alcoholism. He was convinced the crazy world of touring could kill him.

However, there were still fans out there and money to be made,

so in 1993 Roland agreed to license the name of the group to Brown and replacement guitarist Bobby Ingram (who had been in Brown’s solo band). This arrangement lasted two years, when Brown developed serious health problems and could no longer tour (he died of kidney failure in 2005). In 2000 Roland finally sold the name to Ingram for $250,000 and retired. He died of cirrhosis in 2006.

Bassist Banner Thomas and drummer Bruce Crump also came back as sidemen, but neither lasted long under Ingram’s aegis. Both have since died. Even Dave Hlubek came back for a time as a sideman in the group he himself had founded. He died in 2017.

Ingram continues to tour with replacement members who get paid by the gig. He is the only guitarist in a group that was once renowned for its three-guitar army.

The group’s fans have largely split into two camps, those of the “original” Hatchet and those of the current lineup. The social-media war between the two camps has been written about and commented on profusely; there was even a cover story about the feud in Folio, Jacksonville’s alternative weekly.

Ingram for his part has insisted he is proud to carry on the Molly Hatchet tradition and that he is doing so with the most honorable of intentions. This may well be true. However, many of the older fans continue to attack him on Facebook, disparagingly calling the group “Bobby Hatchet.”

The oddest part of the story is that every member of the original lineup has died—along with several replacements—almost as if the group had been cursed. Hatchet has had approximately 20 members over four decades, 11 of whom are deceased.