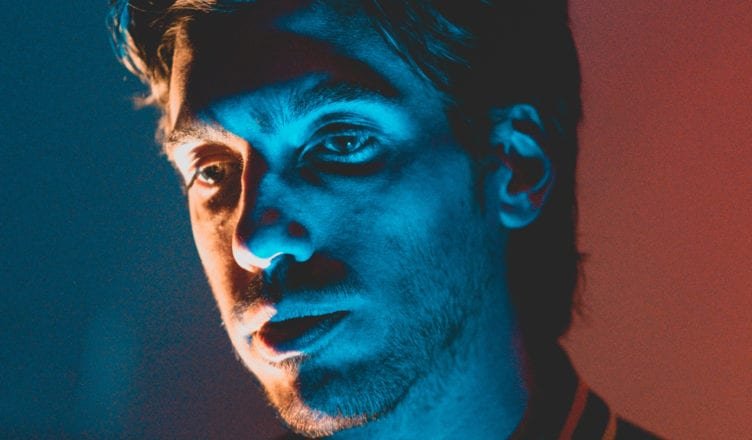 We first encountered Monterrey (or as his parents named him, Roger del Pino) from his trippy video for “Neon”.  With it’s 1980’s infused look and sound it played like a deleted scene from the Netflix series Stranger Things. Monterrey’s newest four song EP Elapse, continues in  that laid back electro, chillwave tradition that will please fans of Washed Out and M83.

After 10+ years of unfulfilled music projects playing in other songwriter’s bands, Monterrey was my first solo project aimed creating music on my own terms. I’d grown up listening to 90s dance and rave music but also taking influences from 80’s New Wave bands, so I knew I wanted whatever the project became to be a balance between electronic and live music, which is when the first Monterrey single, Play Along, was born (2015). The name, ‘Monterrey’, is a moniker derived from an image of the Mexican city while browsing through National Geographic magazines one day. The band is comprised of myself, and friend Tony Carballeira, another Miami-native, to aid with live performances. A drummer will also be retrofitted into performances, but the spot currently remains vacant.

How does Monterrey approach a live show?

Our approach to live shows will take a different shape this year. Previously, a drummer had never been a part of the line-up, but adding one brings a whole new dynamic to our sound. Electronic drum pads and acoustic drums will now make for a more dynamic set. Short 2-chord progressions are layered to create a pop track in the studio. In a live setting, those songs will be sampled live from scratch and grow organically through the set. The most notable example of this is the EP’s leading single, Make Me Feel, which uses a whopping total of five lyrics and a two-chord progression and stacks each sample as the song crescendos into a cyclone of sound using meandering synth-lines and vocals to climax.

What inspired and influenced your newest EP, Elapse ?

In one word: Age. Approaching my 40s, the clock ticks at a clear and more speedy pace. It’s a time when you take a look back at your life and choices that led you to the present. Sometimes that translates into nostalgia for me. Other times it could be anxiety and doubt. The EP’s title and songs like Lately are very reflective of the latter-mentioned themes. They can be heard in lyrics like “Lately I’ve been miles away, been laying up all night and day, sometimes I often dream I’m old, and when I die I wake” painting a dreamlike picture of re-incarnation or not being able to discern dream from reality due to insomnia.

What do you remember about the writing and recording process of Elapse?

The EP’s final track, Said and Done, was written and produced in the days leading to Hurricane Irma in 2017. The song draws from the despair leading to the event as a massive Cat 5 Hurricane loomed on the coast off South Florida pushing droves of people to evacuate in its path. The lyrics paint a dark picture of a crumbling society on the brink of doom drawing on inspirations from The Allegory of Plato’s Cave in lines like “Even though the shadows on the wall, chain you down to all the visions of, getting up, the answers holds you down”. I really felt like I was the only person who was going to stay behind in the wake of the storm. After boarding up my home, I found myself locked in a bunker awaiting the impending storm working on this song in the dark. The track’s title and Plato inspiration also play back into the themes of the doubt and anxiety of not accomplishing my dreams, and running out of time to do so, hence “Said And Done” became the title for the track. When the storm hit, we were left without power for weeks, which evidently set the EP’s production back quite a bit. I thought it fitting that the EP’s first completed track was the last song in the set.

How did you decide upon the 1999 songs you are going to be covering for The End of the Century night?

Being a 17-year old in 1999, I was a film nerd making homemade movies on my dad’s Super 8 camera with my friends and was always looking for new film tricks. I was also an avid MTV watcher and one day came across a video by The Chemical Brothers directed by Michel Gondry for a track titled Let Forever Be fronted by Noel Gallagher. Naturally, being an Oasis fan and a homemade video aficionado, the track (and video) stayed with me through the years. It became sort of synonymous with my memories of 1999 and getting high for the first time (highly recommended if you haven’t seen the video) at my friend Jorge’s house in West Kendall.

Where were you and what were you doing in the fall of 1999?

I was in Miami in 1999. Most likely locked in a room playing video games or spinning house/trance records for fun at the time. I have a vague memory of buying a record during that time at Grooveman Records on Washington Ave by Stardust titled “The Music Sounds Better with You” which was produced by Thomas Bangalter, who later went on to form Daft Punk. I still own it.

To celebrate David Rolland’s novel The End of the Century,  on Saturday, June 2nd, Monterrey and others will cover songs from 1999.

Join them at Gramps, 9pm.