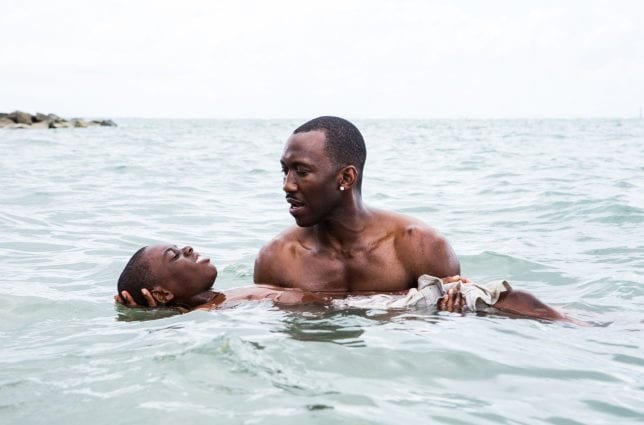 Editor’s Note: Saturday night, August 24, at the northeast corner of Little Haiti’s NW 79th St. and NW 12th Ct. there will be a free screening of the 2016 Oscar winning movie Moonlight  projected on a billboard under the stars (or the clouds). The event is free. The movie starts at 8:15, but you can grab your seat as early as 7:15. To celebrate Miami’s most acclaimed movie we’re running Pavel Klein’s review, which originally ran on Punch Drunk Movies before Moonlight was immortalized as a best picture winner.

Moonlight is a patient movie that requires a little patience.

Filled with long silences and unfurling with a deliberate pace, it is demanding of its audience and is not the kind of movie that can be viewed passively. Meeting it half-way, though, rewards the viewer with a subtle and surprising film. These are buzzwords, to be sure, but they are wholly appropriate in this case. Moonlight is something special.

The film depicts the growing pains of its protagonist, Chiron, who struggles with his identity and the denizens of the ruthless Miami neighborhood in which he lives. It is divided into three chapters, with each section following Chiron at a different stage of his life: as a child (Alex Hibbert), a teenager (Ashton Sanders), and as an adult (Trevonte Rhodes).

His is a complicated life. He has a well-meaning, single mother, Paula (Naomie Harris), but she is addicted to drugs, and as her addiction strengthens, her parental skills weaken. Life outside the home isn’t any easier. He is prey to bullies, partly because of his diminutive stature as a child (nicknamed “Little”) but mostly because of his possible homosexuality. Isolated and confused, Chiron attempts to find out who he is and how, if at all, he fits into the world.

I’ll dispense with the obvious accolades first. The performances are uniformly excellent. Because Chiron is introverted and quiet, there is a danger that he could come off as one note in the wrong hands, but all three of the actors portraying him do a phenomenal job of bringing the character to life. Naomie Harris acquits herself nicely also, though some of her vernacular comes off as a little forced. But it is Mahershala Ali that stands out from a crowd of great performances. He plays Juan, a kind and gentle father figure who also happens to be the neighborhood’s drug dealer. He has a deep affection for the boy, but is weighed down by the guilt of his direct contribution to Paula’s illness, and, in turn, Chiron’s misery. It’s a complicated role, and Ali manages to find the heart and the toughness, the yin and the yang, that drives the character.

But the film is more than just an actor’s showcase.

The word “subtle” has already popped up, and for good reason; you have to pay attention to every nuance and every line of dialogue. A major character, for instance, disappears from the narrative completely, but no direct mention of it is made. It’s only during a heated exchange that an event (forgive my vagueness. Spoilers, you know…) is mentioned, and it is up to us to connect the dots between that event and the character’s disappearance. There’s very little hand holding, narratively speaking, and if you don’t pay attention, it will feel as if nothing of importance is happening and the movie will wash over like an eternal bore. It’s not a bore, though, and, frankly, it’s nice to have a film that challenges an audience to pay attention. Moonlight doesn’t spell everything out, and I was happy to attend its spelling bee.

With an unpredictable narrative and an unexpected tone, the movie forgoes histrionics and maudlin drama. Though often sad, it also doesn’t wallow in misery. And in the second half, especially, it goes in surprising directions. When describing Moonlight to a friend, the moment I mentioned its setting and that a drug dealer was involved, he immediately jumped to a natural conclusion: the film would end in bloodshed. While violence is not completely absent, it’s not the film’s raison d’etre. Refusing to traffic solely in cliché, the focus is firmly on the characters, their influence on each other, and the connections they attempt to make.

Moonlight won’t be everyone’s cup of tea. Honestly, I wasn’t even sure it was mine as I watched it. With a nearly silent protagonist, there were moments of severe impatience on my part. I had to suppress the urge to scream, “Say something!” a couple of times. Afterward, though, the film kept brewing in my mind. I started making the connections that writer/director Barry Jenkins had set up, and as I began to understand it, I started to truly appreciate the movie. Moonlight is a touching film and a significant achievement. And, yes, it turned out to be my cup of tea.