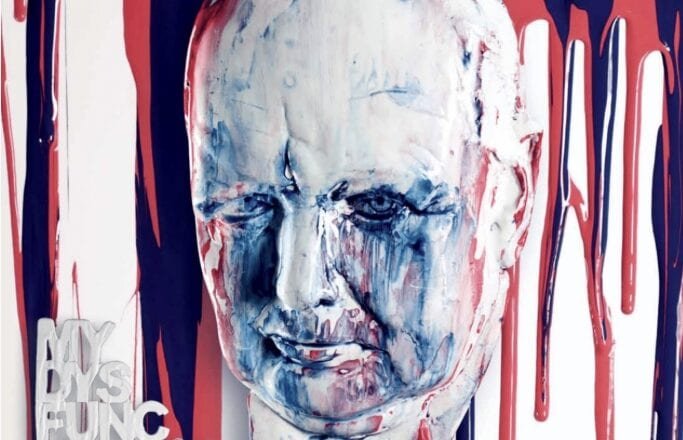 Churchill’s Pub celebrates its 40th anniversary with a month’s worth of shows. The whole shebang started on September 1 under the haunts of a bordering hurricane. Released on that date was the beautifully crafted and meticulously organized My Dysfunctional Home coffee table art book. It’s the dream of the somewhat weirdo, fly on the wall, German artist Michael Freiwald. I sat down with Michael over a cup of tea to discuss his achievement.

Michael and I go back a couple of years. His visits to our world started late in the game of Churchill’s’ existence, around 2013. Here is a guy who had searched the world of music to accidentally find what he was looking for in Little Haiti of all places. Michael grew up with the music of his home country – the likes of Can, Kraftwerk and Neu! Steering more towards punk by the late 1970s, he then went back in music time and traveled to the Mississippi Delta to discover its roots. Jaunts to NYC and travel across the entire US of A gave him an understanding of this foreign land. He hadn’t heard of Churchill’s until he saw an ad for a show celebrating Iggy Pop’s birthday. He didn’t end up attending the show but pasted the ad on a map of Miami to intrigue him until his next visit. He eventually stumbled into Churchill’s in the last days of the original owner Dave Daniels’ reign and met legendary bartender Nicky Bowe and Rat Bastard.

Michael Freiwald is a painter, an artist who first takes photographs and then paints them into portraits.

He starting doing this for the Churchill’s alumni approximately 5 years ago. Humble and not interested in accolades, he would introduce himself to the performers he painted and give them prints of his work. As he was doing this he realized he was archiving a time in history of this ever-so-bizarre establishment. Our friendship started with he and I having conversations at Sweat Records. He decided that Churchill’s needed a book written about its history and made it his goal. Michael lives a somewhat completely normal life back in Deutschland, but made time to travel to Miami at least bi-annually for the past few years. Over our conversations I told him if he really wanted to see how Churchill’s ticked he needed to attend the International Noise Conference.

As history books go, trying to write one on a place that has existed for 40 years, having only witnessed the last 5 or so, became a challenge. For the 40th anniversary Michael wanted to do something special and realized the history book must wait. Last year during Art Basel, he was invited to display his paintings at Churchill’s and the show was a smash. He then decided to put his heart into making an art book in honor of this year’s celebration. He asked for quotes from those who have graced the stage or learned a lesson or two at “our beloved shithole.”  For further depth Michale decided to make the book three parts. First, a section of his art, second, a section of Eddy Alvarez’s flyer artwork of Churchill’s shows, and third, photographs of the International Noise Conference by Walter Wlodarczyk. This by no means is a complete history of Churchill’s, but a brief moment in time of some of its modern and longtime characters.

As the deadline neared Michael decided that manufacturing and publishing needed to be done stateside and most importantly in Miami. I advised him to look up Exile Books and they steered him to Creative Creative. Just as the clock was running out and not really sure if the books would even be ready by the time his flight landed at MIA, it all came together.

My Dysfunctional Home is beautiful – printed on thick pages, displaying the art exquisitely.

Throughout the book are quotes from the locals on memories of music, mucus, and madness. The front cover is an amazing rendition of Sir Winston Churchill of which Michael showed me the sculpture he made to achieve it. This cover art should become the new symbol of Churchill’s – it’s that good.

By the time this story runs, Michael will be back in the land of lederhosen and strudel, doing those secret “normal life” things that I shall not reveal here. He will also be tortured by the idea of actually writing that long-overdue book on Churchill’s in story form. So if you’re a “regular,” be prepared for an overly-nice, weirdo German guy asking you for all your stories of the rest of this place of legend’s history. In the meantime, he’s totally satisfied with the art book capturing a small time capsule.

The book will be available at Sweat Records and via its web store until the first edition sells out.