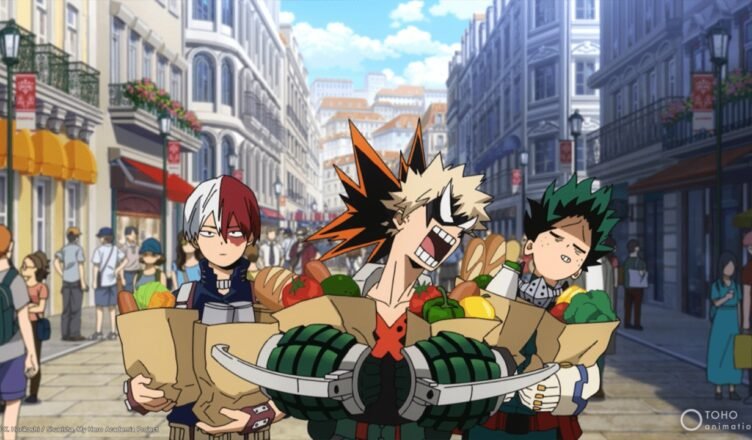 “Dude, you gotta watch My Hero Accademia!” I heard this phrase just about every day for the first two months of 2020. The person saying it? A co-worker, friend, and anime lover. I’m a lapsed fan of Japanese animation myself, having checked out around the early turn of the century after Cowboy Bebop finished its run. You can’t improve on perfection, so I just kind of rolled my eyes at my friend’s incessance, “Sure, sure, Nick.”

Then the pandemic happened.

I suddenly had plenty of time on my hands. I put on the first episode of the five season strong (and still going) tv series and…I wasn’t impressed. Episode two, though, was much better and before I knew it, I was hooked on the antics of Izuku Midoriya and his classmates as they trained in a specialized hero school to become superheroes in a world where 80% of the population has developed “quirks” or unique superpowers. (And when I say unique, I mean unique: One dude controls fabric. Another has tape that comes out of his elbows. Yet another is half frog. Etc.)

It’s a popular show both in Japan and the U.S., so here we are with a third theatrical movie based on the anime, My Hero Accademia: World Heroes’ Mission. (Anime titles can be a mouthful). Even as a nascent fan of the series, I’ve seen the first two movies already and was excited to review this new one. So, how does it stack up? Par for the course. If you’re already a fan of the series, you shouldn’t be disappointed. If you don’t know a Deku from a Best Jeanist, this probably isn’t the place to start, or is it?

If you have seen the earlier films, you probably should know what to expect from this one. A previously unmentioned villain shows up and is more powerful than any other foe our hero, the green haired, giant-hearted Izuku, who’s obsessed with becoming the world’s number one hero because he wants to help people, has ever gone up against. Unlike the series, whose villains rarely, if ever, are fully defeated, even at the end of several episode arcs, these uber-powerful villains are dispatched and forgotten by the film’s end. To be honest, I can’t even remember what the villains of the first two movies looked like and what their deal was. I think a dude turned into a giant, robot clock monster thing in the first one, all metal gears and wires attacking our heroes? I’m not sure anymore.

The villain this time around may kick around a bit longer in the old noggin, if just because of his blue skin, wild outfit–a robe dotted with iridescent mirrors–and name: Flect Turn. (Speaking of mouthfuls…). Flect wants to rid the world of people with quirks, though, ironically, he himself is a quirk-er. Using some doomsday theory as an excuse, Flect releases a chemical agent that only harms those with superpowers. Underneath his far-fetched reasoning for doing this (something about people with quirks possibly bringing about the end of the world, or something) he actually has a much more personal rationale for his actions. And that’s what makes him stand out a little more also. Like the motives of the best ubervillains, Flect’s is kind of understandable on the one hand, while selfish, myopic and monstrous on the other. I’ll let you discover what that reason is for yourselves, but I liked the simplicity and straightforwardness of it.

Izuku, meanwhile, now an intern for a top hero agency, scours the countryside, along with just about every superhero around the world, for Flect. Through some convenient mix-ups and energetic chase scenes, Izuku somehow ends up on the run from the police along with a new character: the young, seemingly ne’er-do-well, Rody Soul, a disenchanted teen, raising his younger siblings by himself in the slums. Like many a story in the Hero universe, this cynical character is eventually won over by the selfless, (insanely) driven Izuku, and comes to see life through the hero’s rose-tinted glasses.

Come to think of it, maybe this isn’t the worst place for a My Hero Accademia noob to start. With these new characters supplanting the need for too much previous knowledge of the show and its characters, a newcomer could, theoretically, start with this third movie. It’s certainly exciting enough with several well-done action sequences sprinkled liberally throughout and a fun musical montage that shows the strengthening friendship between Izuku and Rody. And even if some things aren’t diligently explained because you’re expected to know by this point, it’s still going to be clear enough who the good guys and the bad guys are and why they’re doing what they’re doing. True, some things might not mean much to the uninitiated–such as the trio of fan favorite characters that team up in the finale– but there shouldn’t be outright confusion.

And whether you’re familiar with the world or not, it’s still a nicely animated movie. Now, it’s not on the eye-popping level of an Akira or Spirited Away, but it sure has its moments. A late action sequence stands out because it attempts the animated version of a “oner,” as the “camera” swoops from one character to another doing their hero thing with seemingly no edits in between. What’s cool is that it looks like traditional rather than obvious computer animation. The background designs are simplified, almost becoming line drawings, so that they can rotate into different angles in front of the camera as it glides through the action.

If you’re an action fan, an anime fan, or just want to see something different, I recommend (*deep breath*) My Hero Accademia: World Heroes’ Mission. For me, it was a welcome return to a bunch of characters I’ve become quite fond of. And frankly, Izuku Midoriya’s unwavering optimism was a welcome sunny balm to a depressingly rainy weekend. So, whether you are a My Hero novice or expert, an anime connoisseur or neophyte, give this one a shot.

Oh, and thanks, Nick. You were right.