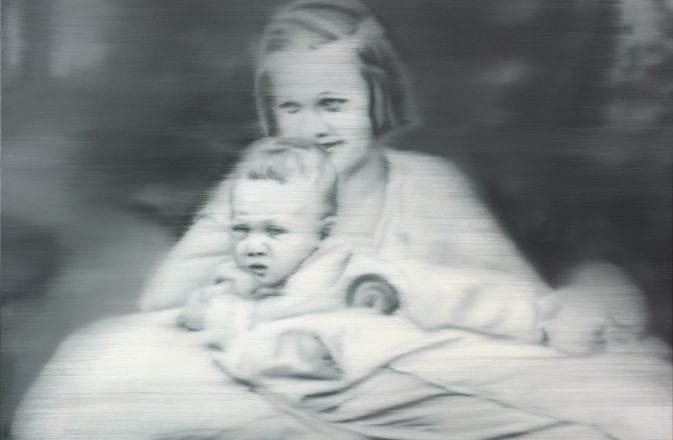 Never Look Away is pretentious with a capital Gimme A Break. It makes sense, then, that it’s nominated for the Best Foreign Language Film Oscar. The Oscars love self-importance. The thing is, the movie’s not bad, exactly. It’s very watchable, even at a butt-numbing three hours. But boy is it full of itself.

The film is a thinly veiled account of contemporary German artist, Gerhart Richter, here called Kurt Barnert. The story follows Kurt from a young boy into adulthood and a blossoming art career that intersects with the turbulent history of East and West Germany during World War II and post.

It wasn’t long, though, into this intimate epic that the movie almost lost me with a scene of utter pomposity. In 1937, Nazi drenched Dresden, a young Kurt walks with his eccentric aunt, Elizabeth (Saskia Rosenthal, luminescent), past a bus depot. Elizabeth pauses, moves closer to the buses with the drivers still inside, and clasps her hands together in a “please” gesture. The drivers recognize her, look at each other, nod. In unison, they begin blaring their horns. Elizabeth in the middle of this cacophony, raises her arms and tilts her head back in orgasmic ecstasy. The camera, meanwhile, circles around her, first in one direction, then the next, over and over, while strings swell on the soundtrack. Give. Me. A. Break.

The movie was written and directed by Florian Henckel von Donnersmarck (a name you can set your watch to), a filmmaker with talent. Over a decade ago, he made a movie, The Lives of Others, that I genuinely admired. With Never, he dips back into some of the same themes of that film, art vs. hegemony (specifically in the GDR again), individualism over socialism, but with diminishing returns.

True, much of the movie isn’t as over-the-top as that bus scene, at least not visually. Donnersmarck prefers clean, unfussy compositions in glossy, grayish/blue tints. Some would call them boring. I lean toward elegant. But that elegance disappears when the characters open their mouths. There are portentous musings on art (the title is derived from one such platitude) that are as illuminating as a snuffed-out candle. And some of the dialogue is downright silly. A grown-up Kurt (Tom Shilling), staring with laser blue eyes at his infatuation, Ellie, says things like, “You’re so beautiful, it’s almost unromantic,” or after revealing her pregnancy, “Now you belong to me.” It’s downright creepy.

That creepiness is reinforced by Shilling’s demeanor as Kurt. He’s a photogenic actor and looks the part of a proverbial starving artist, but there’s something missing behind the eyes. It doesn’t help that he stares, a lot. Perhaps he’s suggesting an artist caught up in his own world, but at best it comes off as blank, at worst, like a stalker. When applying to a Dusseldorf avant-garde art academy without a portfolio—having just escaped East Germany–the interviewing professor (a captivating Oliver Masucci) accepts him because, as he explains, there’s pain behind Kurt’s eyes. Funny, all I saw was a “Vacancy” sign.

Kurt simply doesn’t register for much of the movie. Heck, it takes a good hour before the film decides that Kurt, indeed, is the film’s focus. Before that, a bunch of characters are introduced, poorly, showing up in lengthy scenes that left me wondering, “Who the heck was that?” There are also drawn-out detours into Elizabeth’s tragic story of confinement in a mental institution under the icy watch of Nazi doctor Carl Seeband (a cold, calculated performance by Sebastian Koch) who’s on a stomach turning mission of “cleansing” German lineages of mental illness. The story then pivots and follows the Professor as he slithers out of accountability (this involves saving a Russian general’s wife during child birth, diagnosing her condition by only hearing her screams…which, probably not). It all connects eventually (a long eventually) to Kurt and his artistic expression, but it’s clunky.

I was never bored, though. The movie plays out like a soap opera, an especially soapy and pretentious one, but one where you want to see how it all connects and what’s going to happen next. And, darn it, I actually enjoyed the last hour quite a bit. Once Kurt escapes to West Germany, the movie comes to life. Probably by design, as the lively West is juxtaposed to grim East Germany. The characters in the Dusseldorf art school are especially entertaining, their eccentricities more enjoyable than annoying. And by the end there are several transfixing montages of Kurt painting that, mixed with a wonderful score from Max Richter, say more without a word than the movie did for its first two hours.

Florian Henckel Von Donnersmarck doesn’t make good on the promise of his debut film, but there’s a warmth of spirit and a humanity in the last act of Never Look Away mirroring his earlier work that also makes me give the movie a mild recommendation. Be prepare to roll your eyes, though.