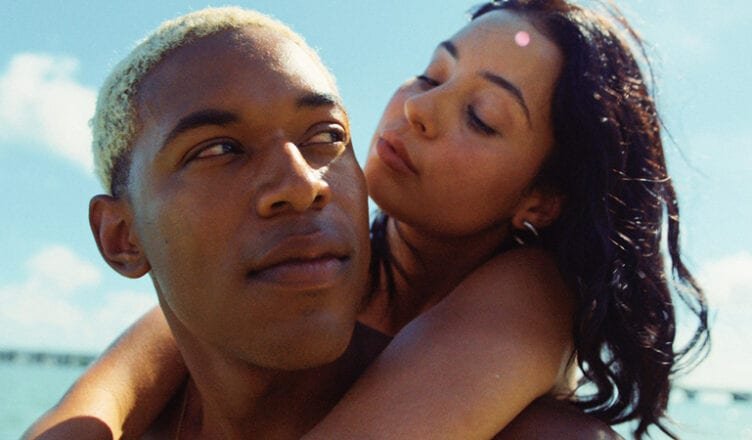 Waves strives for depth, but like its young protagonists, it’s only teenage deep. All moping and feeling sorry for itself. With an indie sensibility, South Florida setting, focus on an African-American family, and repeated ocean imagery (complete with brewing storms in the background), Waves hearkens back to Moonlight, the Miami-based film that became a critical darling and multi-award sensation. But those are just surface comparisons. This is about an affluent family, living in a beautiful house, with one of its protagonists a popular, outgoing jock. More importantly, Moonlight was stylish with a poetic soul, Waves just has style.

Waves has flair, but at its core it’s a very stylish after school special. It becomes more than that, thankfully, but that first hour or so, oh boy, it’s like something a hungover English teacher would force on a bored high school class in order to take the day off.

The camerawork is energetic, constantly on the move, constantly roaming through each scene. Aspect ratios change, while dramatic colors enhance shots and kaleidoscopic sequences break up scenes (a colorist, Damien van der Cruyssen, is even acknowledged in the open credits). All of this gives the movie a visual vitality, especially in its hypnotic and lengthy montages.

That vitality, sadly, is lacking in the story department. Despite all of that style, the story feels perfunctory. It’s confidently told, at least, and much of it is relatable, but nothing in that first hour convinced me to care. All of those fancy camera angles, yet nobody bothered finding a new angle from which to tell this type of story.

Waves first hour is packed with enough incident that it’s like watching a full two hour movie in half the time.

It’s exhausting. Filled with ominous dread, much of it delivered by an anxiety-inducing wall-of-soundtrack (score by Trent Reznor and Atticus Ross), that first half is clearly building to…something. We don’t know what, but we know it’s coming, and we wait and wait for it to come. Tyler is a talented high school wrestler. His father drives him hard (“We don’t have the luxury to be average,” he says), but a career ending shoulder injury leads Tyler to substance abuse, which leads to escalating fights with his unexpectedly pregnant girlfriend who doesn’t want to get the abortion Tyler is passive-aggressively demanding. It builds and builds, but keeps postponing what it wants to get to, so interest just wanes and wanes. It takes so long to get to its point, eventually the movie just feels like Wheel of Misfortune, misery compounds with each turn as you wait for somebody to finally end up on “Bankrupt” and get it over and done with.

Once it finally is over and done with, the movie is anything but, leading to a whole second hour that switches to a completely different point of view. Emily, Tyler’s younger teenage sister, is the focus here as she deals with the fallout of the film’s first half and does so while navigating her first real relationship with Luke, who was on Tyler’s wrestling team. This half is better, more poignant. The switch to a female point-of-view is unexpected and welcome, especially since the first hour and fifteen minutes is so alpha-male-centric. And the way the second hour juxtaposes with the first gives the movie some much needed emotional heft. But the second half is still just as ponderous as what preceded it. It’s a lot to sit through. Too much risk, not enough reward.

Writer/director Trey Edward Shults puts the various Miami/South Florida locations to good use. As a backdrop, Shults sticks to our suburban areas, lakes, and canals not usually represented on the big screen, giving a sense of the real South Florida rather than the touristy one (well, mostly. The Rickenbacker Bridge appears within the first five minutes, a familiar site in movies because of its views of Miami’s skyline).

Clearly, Shults has talent, and, clearly, he put thought into the movie. It all comes together nicely enough in the end, offering hope without treacle. But there’s not enough insight into the characters, into human behavior to justify all of the preceding excess. In the end, Waves is more exhausting than enlightening.