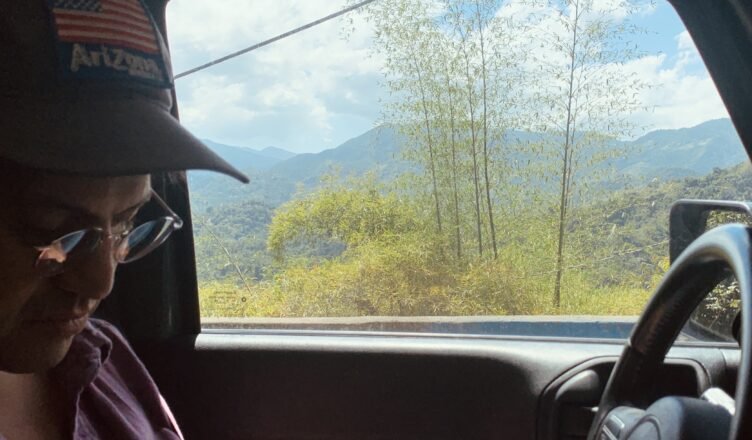 When I wrote “Jesus Is Dead”, alone at the piano, it had an immediate kind of resonance to it, and a strong visual/cinema kind of feel, even before we put this rather grandiose arrangement on it. As such, I think it lends itself to a music video rather well. It also very much is a sonic and in some ways, conceptual outlier on the album. It leads off the album, which again, suggests very little of what is to come, almost the contrary. This is an album about my past and my hometown, very personal and pastoral. We shot this video in New York City, on Halloween, wearing a bunch of crazy masks– I enjoy this contrast.

Me and old friend and collaborator, Gregory Stefano, were talking about identity, politics, the strangeness of the times, and feeling estranged from yourself. For me, the “Jesus Is Dead” video is about trying to find yourself amidst the legacy of where you come from, and all the baggage and expectation that can create. This concept evolved quite a bit from conversations we were having. We got to a point where I felt like we were aligned enough on what we thought about this, that I quarantined for a couple weeks, got in my car alone, and drove through a crazy rainstorm (not unlike the one hitting my windows at this very moment in Miami) all the way to New York City.

I left Miami to make the video, knowing I would not have a place to live when I returned if I decided to go. The decision to go was a very sad moment, but empowering to know what I was willing to sacrifice to make this body of work.

I put a portrait of my fathers in the back seat of the car, and he kind of watched over me the whole way up. He always got a kick out of South of the Border, so I took him out when we got there, and let him have a look around to see what had changed. I even took him to Queens where me and Greg bought a poker table off of some wise guys in the back of some auto body shop. My dad was never one to be intimidated or afraid of any situation. Between him and Greg, I really felt bulletproof in a moment of my life where I felt like everything was falling apart. It was helpful, but also comical and absurd.


Come see me and some friends do a Woody Guthrie Tribute at the Center For Subtropical Affairs 7/10. And please join us for the record release of Nick County & The All NIte Welders: A Colorful Corner of Northeastern Pennsylvania 7/23 at The Oak Garden w Mustard Service, Rick Moon & Corey Perez.

Nick County is a songwriter, gambler, and birdwatcher living in Little Havana. His new album, "Nick County & The Rainbow Smoke: Cocorico Simpatico Corazon" is currently streaming on all digital formats.

View all posts by Nick County →