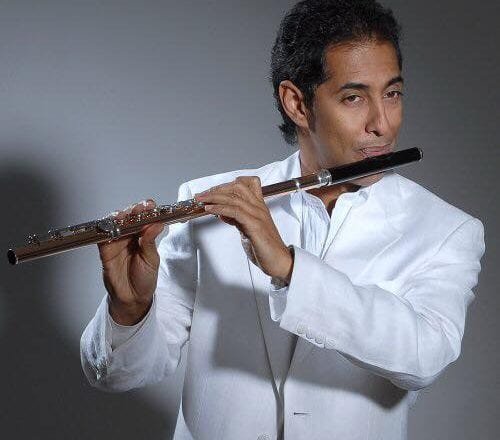 How does one decide to dedicate their life to the flute?

For Nestor Torres it was the simple fact that no one else he knew played the instrument. “When I went to music school in Puerto Rico I had to fill out an entrance form to say what I wanted to play. My father was a pianist who surrounded us with music. I’d been playing the drums since I was five. But the flute was different. I thought let me play that.”

The instrument and the man fit together well. He’s played the flute with musical titans like Tito Puente, Herbie Hancock, Gloria Estefan, and Dave Matthews. He’s been nominated for Grammys and his newest record Jazz Flute Traditions was just nominated for the best Latin Jazz album in this years Latin Grammys. All the accolades Torres said wouldn’t have happened if he didn’t make the move to Miami back in 1981.

“I owe my success and sound to Miami and its people.” Torres said on the telephone from New York City. “Once I came to Miami I developed a sound that couldn’t have happened in any other place. My career developed in a grass roots way playing restaurants, parks, weddings. Word of mouth drew audiences to me and my music became a co-creation with my audiences.”

His connection with Magic City has Torres excited to play his first South Florida show in ages Friday night, September 28 at 8 p.m. at Museum of Contemporary Art North Miami. “I used to play Friday nights at South Pointe Park in the late ’80’s. I used to play Calle Ocho and Coral Gables. All the traveling and touring has me playing Miami less and less. To come back and play here is always very meaningful. Especially this show in North Miami. I drive past MOCA every day to my neighborhood in Bal Harbour.”

Even though he’s been playing for decades Torres still feels some nerves at every hometown show. He remedies his anxieties with lots of preparation. “Ideally I practice three hours a day. An hour a day gives me maintenance. I tell my students do long notes and slow scales to have  a good sound. Then I’ll work on my repertoire either jazz or classical.”

The intensive routine he says ensures a show fans both old and new can enjoy. It also serves as proof that the younger version of Nestor Torres picked the right instrument all those years ago.