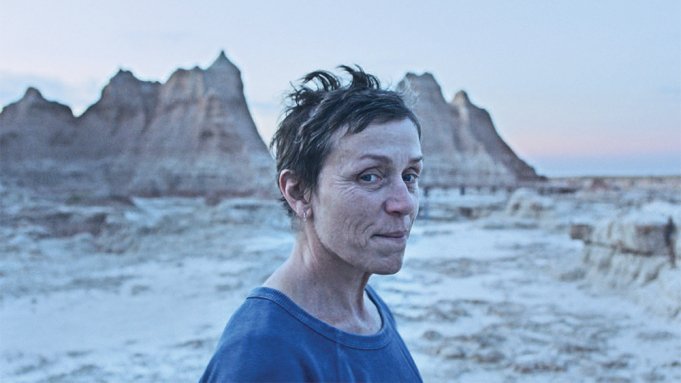 For fifteen minutes Nomadland was my kind of movie. You have an excellent actor in Frances McDormand playing a down and outer.  She drives us around beautiful Western vistas, introducing us to the kind of poverty Hollywood movies usually avoid, the Amazon warehouse workers, the  semi-homeless living in a van.  Nomadland seemed like it could be the cinematic descendent of all those rambling wanderer character study movies from half a century ago like Easy Rider or Jeremiah Johnson  or Badlands. And for fifteen minutes it was.

But a charismatic performer and majestic scenery can only take a movie so far. At some point an audience is going to need some semblance of a plot, which disappointingly Nomadland is unwilling to provide. Instead for close to two hours we watch McDormand struggle through odd jobs, take bowel movements in buckets, and converse with fellow drifters. She’s a skilled enough actress that she can make most of these scenes watchable, but  for someone with a typical 2021 level attention span, they’re a chore to get through.

Someone defending Nomadland could argue that’s the point. The lack of purpose of this movie matches the aimlessness modern capitalism inflicts on the protagonist and so many others.

But the cynic in me can’t help but to feel so many scenes were tacked on just to make the movie long enough to be feature length. For a century the ninety minute to two hour running time of a movie was based on how many showings a  theater could profitably screen in one day. But the way we watch movies has changed drastically.  People stream them in their homes, stopping and starting them at their convenience. Maybe it’s time for filmmakers to change too.  Movies can be longer than they traditionally have been, they can be shorter too

Somewhere in Nomadland is an excellent thirty minute movie. It would have been cool if they had the freedom to release it as such.