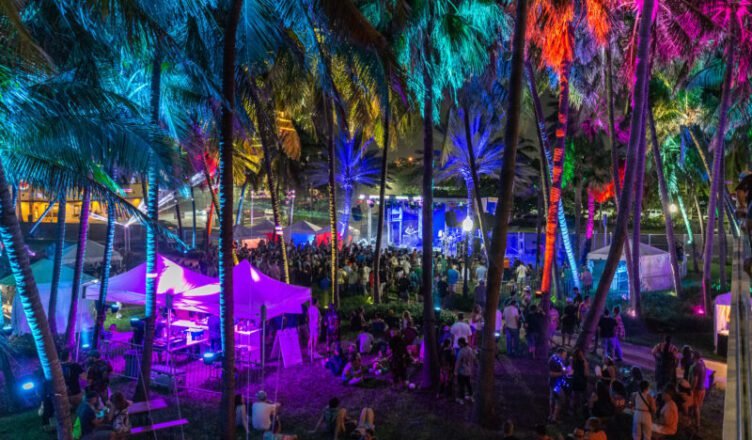 Where have all the jam bands and improvisational musicians been hiding in South Florida? A few factors might explain it: a rise in popularity for newer genres; the pandemic; and — more on this one in a bit — a major relocation. Thankfully, the North Beach Music Festival (NBMF) in Miami Beach is back for a second year to re-stir the jam and usher in a new era for fans with a modern yet mindful lineup.

“Miami has a long history with hippies and the counterculture,” NBMF co-founder Gideon Plotnicki says, citing regular visits from scene stalwarts such as the Grateful Dead and the Allman Brothers Band back in the day. “In an increasingly digital world, we are major proponents of live music and improvisation, and fans have been waiting over a decade for an event like this to return.”

Gideon and brother Noah Plotnicki (with an assist from Miami Beach’s invaluable Rhythm Foundation) have assembled a three-day celebration, Dec. 9-11, of all things jam in South Florida. One impetus for the event? The relocation — and eventual disappearance — of the Langerado music festival.

Langerado took place annually in Broward County before upsizing to the Everglades in 2008 at the Seminole Big Cypress Indian Reservation (where jam lords Phish rang in the millenium with 80,000 revelers). A four-day camper’s paradise with a free-ranging lineup topped by R.E.M. and the Beastie Boys, the ’08 edition was also Langerado’s peak. Another planned move for 2009, to Bicentennial Park in downtown Miami, became a cancellation instead. Organizers cited poor ticket sales, and an attempted restart in 2011 failed. The jam band scene in South Florida wasn’t the same anymore.

It appears to be be coming back, though, possibly assisted by a pent-up pandemic appetite for immersive, in-person live music. Locals and a sizable out-of-town contingent made the inaugural 2021 NBMF a huge success — the brothers’ experience booking late-night shows for the New Orleans Jazz Heritage Festival and running their own Brooklyn Comes Alive festival served them well. And their love for jam bands and the genre’s limitless creativity is evident in the lineup populating the Miami Beach Bandshell and environs.

Long-running jammers moe. will headline Friday, performing two sets. Buffalo, N.Y. college friends since 1989, moe. are festival circuit anchors with ten studio LPs and another ten live albums to their credit, and Florida regulars thanks in part to stopover gigs around weeklong jam cruises to the Caribbean and Gulf of Mexico.

Powerhouse vocalist Shira Elias kicks off day two, which expands to two stages. Keller Williams, oft-described as a one-man-jam-band, brings his raucous fusion of alternative rock, bluegrass, folk and everything in between. NYC’s Melt follows with their existential pop built on a love for psychedelia and soul.

Closing out the weekend will be Boston’s Lettuce, whose journey from ‘90s college club gigs to a 2019 Grammy nomination is as funky as their sound.

“We are torchbearers for this scene and community,” says Gideon. “Our goal is to show people how awesome this music is.”

They also want to turn casual listeners into lifelong fans, and expand the idea of what jam can be. “At last year’s festival,” he says, “we had a number of folks get their preconceptions blown away by the inclusion of indie and digital acts in the lineup. And we want to continue bringing artists down here, especially new up-and-coming acts.”