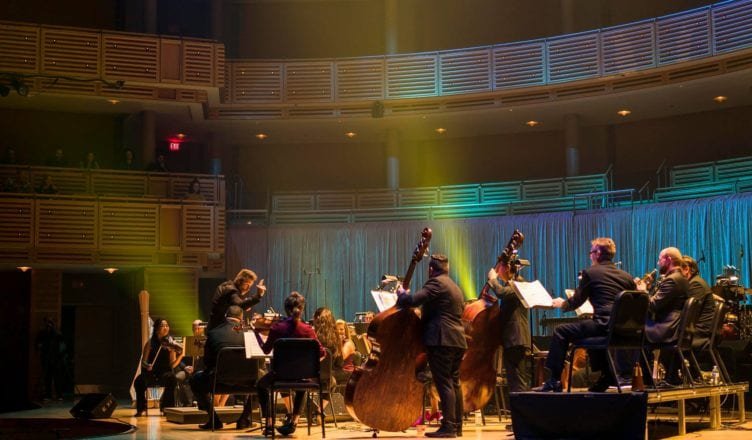 Nu Deco Ensemble, the Miami based chamber orchestra has had a busy quarantine. Throughout the past couple months they have been releasing videos from many of their recent performances. Last week saw their most recent release a live video performance from April 2018 of  composer/DJ Mason Bates’ “Mothership” that can be seen on their Facebook Live page.

A couple weeks before saw the release of a performance from March 2018 at the Adrienne Arsht Center. This one featured ’90’s piano star and University of Miami alum Ben Folds performing Fold’s 2015 single, “Capable of Anything”.

Dance music fans will get a kick out of Nu Deco Ensemble bringing out some classical funk in  their original symphonic suite of Daft Punk they dubbed, “Humans vs. Robots”. This 23 minute performance was filmed in 2017 at The Light Box. It features snippets of many of your fave Daft Punk tracks from 2001’s album Discovery and from 2014’s chart topping success Random Access Memories. If you’re short on time you can skip to the 18 minute mark to hear Nu Deco Ensemble’s rendition of Daft Punk’s biggest hit, “Get Lucky”.


Finally, April saw the release from one of Nu Deco Ensemble’s more recent performances. This one comes from December 2019 at Adrienne Arsht Center where PJ Morton featuring Miami Mass Choir are accompanied by Nu Deco Ensemble for a soulful version of the gumbo song, “Alright/Everything’s Gonna Be Alright”.