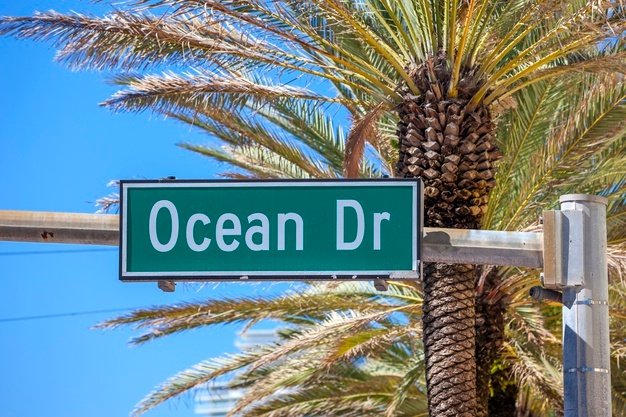 After a year and a half of  Ocean Drive being closed to cars, Miami Beach’s iconic beachfront street reopened  to traffic on Monday, January 24.  It’s now a one way street going southbound between 13th Street and 5th Street. The eastside of the street has a green painted two way lane intended for bicyclists. But there is no barricade between the bike lane and the car lane to prevent impatient drivers from zooming through the bike lane when traffic is stalled.

Some hotel guests were inconvenienced by having to wheel their suitcases half a block to get to their rooms, but many more pedestrians, bicyclists, and skateboarders enjoyed having this road that goes nowhere as the one street in Miami you could stroll along without worrying about a car running into you. Even Lincoln Road has cross streets where walkers have to keep their eyes open. It was a treat to walk, jog, or bike the along the art deco architecture of Ocean Drive without threat of the infamous Miami driver taking a selfie while ramming into you.

But Spring Break is coming and obviously the Miami Beach commissioners thought last year’s car-free Ocean Drive wasn’t turnt up enough.  Mayor Dan Gelber,  Michael Gongora, Steven Meiner, Micky Steinberg, and David Richardson voted last October to bring cars back to Ocean Drive and now Spring Breakers can really party. Rented Lamborghinis can see how fast they can go from zero to 60. Slingshots  can have their fun testing out the bike lane. Rappers can now film videos of vixens twerking from a classic car cruising by Wet Wille’s  And if another crazed shooter wants to take target practice on tourists, they now have the option of doing a drive-by.

I get that Miami Beach’s leaders are out of ideas on what to do about Spring Break being out of control on South Beach. But adding moving vehicles into an area with too many people and too much alcohol is a recipe for unnecessary tragedy.