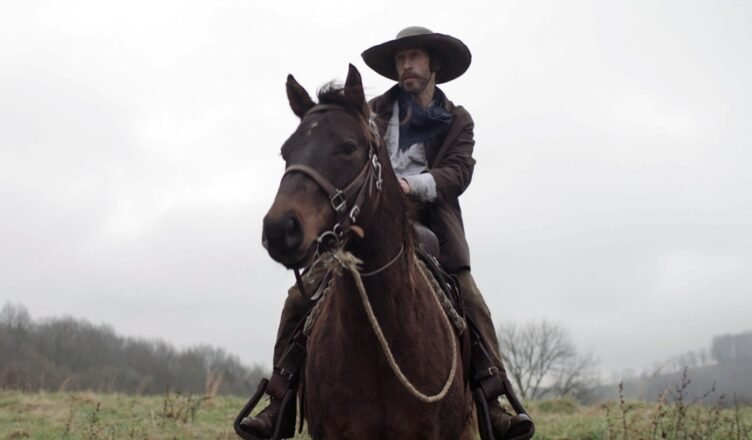 Old Henry is a solid oater. Small in scale but controlled and efficient. And honestly, that’s mostly all I’ve got to say about the movie.

Old Henry takes place in the early 1900s in the wilds of a constantly dewy Oklahoma Territory. Tim Blake Nelson stars as titular Henry McCarty, a taciturn widower and farmer whose teenaged son, Wyatt (Gavin Lewis), wants to do anything but tend to their land and animals. He senses his father feels the same, but the old man is a quiet mystery to him, devoted to the back breaking duties he clearly despises. Their daily drudgery is upended when a wounded man with a satchel of money passes out on their land. Soon enough a trio of men show up looking for the satchel carrier, led by a gravelly voiced, scarred, nearly unrecognizable Steven Dorff. As this is a Western, you know cooler heads won’t prevail in this tense situation, especially since old farmer Henry clearly has a past and a set of skills he’s trying to keep from his son.

The set up isn’t original, but the movie squeezes some interest out of its breezy 90-minute runtime.

Some actors just cannot do period pieces. They look too modern. Tim Blake Nelson isn’t one of those people. In fact, sometimes I wonder if he’s a time traveler. He sports a lazy eye and some funky teeth in this movie, and I spent a good amount of time wondering if those were prosthetics or just Nelson himself (…they’re fake if you’re wondering). But Nelson seems so at home in the period setting with a ludicrously wide brimmed hat and ill-fitting brown pants held up by cloth suspenders looking completely normal on him. He clearly relishes the role, gliding through the movie, unforthcoming but clearly always thinking.

There are some fun bits like when Henry finds Curry (Scott Haze) blacked out from a gunshot wound. Henry carefully scopes out the location looking for clues as to what happened. He traces Curry’s tracks back to a tree a couple of meters away and finds the satchel filled with money. The camera rests on his inscrutable face for a bit as he studies the bag. What’s he thinking? Is he tempted? Then he just loudly says, “Nope!” and gets on his horse and rides away.

But of course, he turns back.

I guess there wouldn’t be much of a movie if he didn’t. And that sets off a chain of events that end in a full-blown shoot out in the film’s last act. I love a good shoot out, especially in a Western, and this one, like the movie itself, is…fine. Perfectly serviceable. The guns are loud and you can tell what’s going on, but it’s missing something, a bit of panache. I think back to Open Range, the Kevin Costner directed cowboy movie from the beginning of the aughts, and another movie that patiently waited until the last act to loosen its salvo. But in that movie, you almost felt every gun shot and every hit. Every shot (both from camera and gun) felt important. Old Henry’s gunfight feels more passable than important.

Which is a shame since the movie drops a twist just before the real shooting happens, a twist that makes the resulting action a visualization of a character’s violent past and psyche, and as a result should be a bombastic finale. Instead, it’s closer to the shrugging emoji we all have on our phones.

But that twist, man, it’s a good one. Though, on second thought, its rewriting of history is a bit gross. Good thing I probably won’t remember the movie long enough to give that second thought.

I’ll be honest. My interest in Escape from Mogadishu stemmed more from its distribution label than the actual movie itself. I love genre movies and, in pursuit of watching as many as I can, I’ve come across the name Well Go USA more than a few times. Okay, it didn’t hurt either that Escape was South Korea’s submission for the 2022 Oscars Best International Film category. But none of that’s really important. For whatever reason that I was drawn to it, I’m glad I checked the movie out. It’s a good ‘un.

Ostensibly a drama based on real events, Escape ably shifts gears through tones and genres without causing whiplash. The movie has a surprising bit of dry humor and, most notably, a couple of well-executed action beats. It’s not an action movie per se, but it’s got at least one truly exciting scene, a mad dash car chase through the war-torn streets of the titular Somalian capital.

But long before that, the movie unfolds patiently, though not ponderously. Set in the early 90s as both South and North Korea vie for UN membership, most of the movie’s first act centers on the embassies from both countries stationed in Mogadishu trying to outsmart one another to win the Somalian president’s favor in order to secure his votes and thus admission into the UN.

In an interesting move, director Seung-wan Ryoo keeps the focus so tightly on the maneuvering between the two embassies that we are just as surprised as the characters are when gunshots abruptly ring out and an apparently simmering civil war suddenly erupts all around them. As they are so wrapped up in their games of one-upmanship, we too are kept in the dark.

whether implicitly or explicitly, this one really is about the divided nation, North and South, a once unified people now separated by politics and ideologies, allies turned enemies. Here in the states, I don’t often think about how painful that must be for the people of both nations. And, ultimately, that’s what sold the movie to me: how palpable it makes the tension between the two countries and how, despite everything that’s going on around them, and despite diversions into different genres, the movie is ultimately a melancholy story about brothers and sisters split up by political forces they have little control over.

It’s also clever that a movie set in the middle of one civil war is actually about another civil war, one whose physical battles have long since finished, but whose ramifications still reverberate years later. Of course, you wouldn’t be wrong to think that using the tragedy of Somalia’s civil war to look at another tragedy trivializes the violence in the African country a bit.

The good news is that even though Somalians are only on the periphery, the filmmakers (the movie’s written by Ki-cheol Lee and director Seung-wan Ryoo) don’t appear judgmental. The Somalis are not shown to be backward, cartoonishly cruel, or war mongers. And that sensitivity extends to how the Northern and Southern Koreans are presented. How easy it could have been for a South Korean movie to make the South the virtuous heroes and the Northerners the villains. Instead, it shows both sides as capable of duplicitousness and compassion.

Once the Northern embassy finds themselves on the violent streets of Mogadishu, tossed out of their consulate by Somalian rebels, they eventually must, to their disdain, throw themselves at the mercy of the Southern embassy, who take them in, but not until after a bit of gloating and haggling. What follows shouldn’t be too much of a surprise as the former countrymen have to set aside their differences to make it out of the war zone alive. It’s corny, but the warmth shown toward the characters and the suspense of their eventual escape attempt makes the whole thing work.

That specificity of North and South Korea, one nation torn in two, will probably limit the film’s appeal abroad, but I don’t know, if you’ve got an ounce of empathy, Escape from Mogadishu really shouldn’t leave you cold.