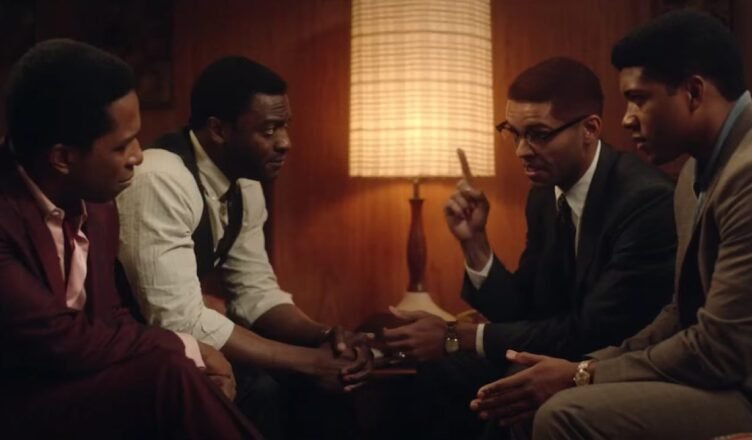 I’m used to being disappointed when a book or comic is adapted into a movie and the filmmakers change things around, but it still always confuses me.  Why fix what ain’t broke? If you like the source material enough to film it, why not stay true to the original? The disappointment from  One Night in Miami though was a first for me.  I’d never before seen  a good play that was turned into a mediocre movie.

I reviewed the play One Night in Miami a couple years ago at Miami Beach’s Colony Theatre. It reimagined the night of February 25, 1964, when a young Cassius Clay won the heavyweight title and celebrated in an Overtown motel room with Sam Cooke, Jim Brown, and Malcolm X. The production wasn’t a masterpiece, but it was a fun, brisk and moving hang with four charismatic historical figures you’d like to get to know better. It was a character based study that assumed audiences had at least heard about the protagonists going into the theater and if not would learn about them over the course of the play’s 90 minutes.

The movie version of One Night in Miami which will be on Amazon Prime Video on January 15 isn’t willing to expect audiences will know who these four figures are. So for thirty minutes we need to see unconvincing reenactments of Cassius Clay boxing and Sam Cooke singing and white people behaving in racist manners toward them all.

When we finally get into the hotel room, the movie starts to resemble the play. The actors all share an easy camaraderie and the dialogue is strong enough to keep your interest. But you might be worn down as a viewer to appreciate it by that point. So my suggestion is to watch the far superior movies  Malcolm X and When We Were Kings and then skip ahead to minute thirty of One Night in Miami.

On a petty side note it was also disappointing to see a movie advertised as set in Miami, not be filmed here. They convincingly recreated the still standing Hampton House Motel, but all the exteriors  are clearly somewhere non-tropical. I know Miami is a completely different place than it was in 1964, but if you’re not going to film on location and are already going to change so much from the play, might as well change the title too.

There’s no false advertising in the new action flick, The Marksman. You get exactly what you expect from every Liam Neeson movie since Taken, an excessive dose of violence and retribution.

Once again Neeson plays a man with a very particular set of skills. And once again he has to protect a youngster from a group of bad guys with foreign accents. Even on auto-pilot Neeson is a charming enough presence that he oozes integrity whether he’s playing a Nazi, a Batman villain, or in this case, a drunk Vietnam vet. While Schwarzenegger had the one-liners and Stallone had the determination, Neeson’s utter disgust for his villains might be the defining characteristic that gets him a spot in the action movie hall of fame.

Neeson is what saves The Marksman from itself. The movie takes itself a bit more  seriously than its plot of a bloodthirsty Mexican cartel chasing a ten year old boy around the country warrants. Too often instead of embracing its true nature  The Marksman screams “we’re much more than a generic action movie”. But there’s just enough gunfights and Liam Neeson monologues that you’re willing to forgive The Marksman for its self-seriousness.