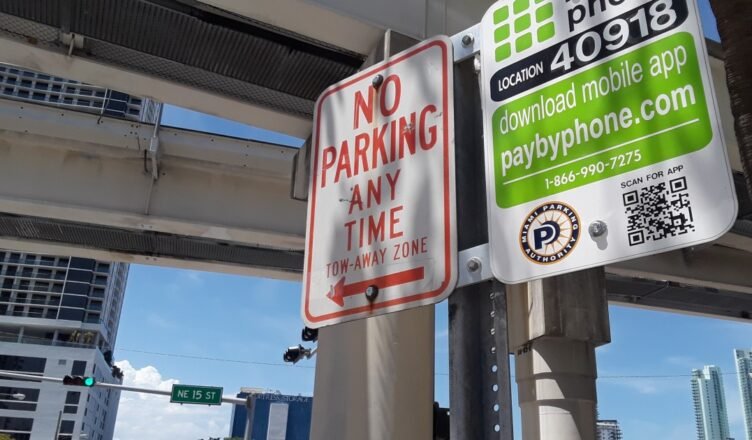 It seems petty, but one of the big issues that’s attracted my attention lately is the cost of parking tickets in Miami Dade County.

I’ve tried to find answers for why the fee of a casual parking ticket was doubled, from $18 to $36, but those answers haven’t been forthcoming.

Before naming names, let me address the issue:

The zillion UberEats and Doordash drivers who comes by my restaurant to deliver food tell me that that, on a good day, a food courier will earn like $9 an hour.

For the most part, since they’re contract workers, the courier companies are free to pay these workers less than minimum wage ($8.65 in Florida, as of January 1). And so that’s generally what they earn.

I work in an affluent neighborhood in Miami called Coral Gables.

Along the curbs of Coral Gables, or in the garages, you’ll probably pay between $2.50 and $5.00 an hour in parking. The garages will sometimes cap the cost at $18 or thereabouts.

At the restaurant where I work, I earn, in wages, $5 per hour. If I don’t get enough tips to average those hourly earnings up to minimum wage, the company will pay up, and I’ll get minimum wage.

Let’s say it’s a rainy Tuesday at the restaurant, just a couple people come in, and I end up going home with minimum wage earnings.

After a six hour shift, during which I earn roughly $48, I will have paid almost half of my wages in parking.

If, in Coral Gables, you stay in your parking space for a longer stretch of time than you paid for, you’ll receive a parking ticket costing $36.

When a food courier, who earns less than minimum wage, has to park their car at the curb, run into the restaurant, collect a meal, and run out to his car again, he’s risking a $36 penalty for not getting there in time.

And let’s say that, most likely, this courier for Doordash is earning $7 an hour.

If he’s worked for five solid hours, driving and delivering meals and sweating about it and being urgent and punctual, and he happens to park at the curb in front of my restaurant for a minute too long, and he gets a ticket–his entire workday will have been for naught.

And it happens all the time.

An elderly food courier recently ambled back into the restaurant, teary-eyed, asking what she could do about the ticket she just got because it literally annihilated all of her earnings for a full day of what amounts to manual labor (you might not think that being a food courier is manual labor, but I’ve done it, and I’ve worked in high-traffic restaurants, and I can assure you: there’s hardly a difference).

The parking fee is immoral. In saying that some or other district or city or municipality should be ashamed of hosting it, the obvious response will be that its officials have no authority over the price of parking tickets. Somebody, though, must have a say in this. And if it’s a problem that’s effecting people in the community, there oughta be some avenue of rebuttal.

Or, at the very least, an inquiry should be met with an answer, a misconception with a correction.

When I tried making my case to Kevin J. Kinney, Director of the city’s Parking Department, in an email dated February 26, he didn’t respond. I instead got an email from someone in his office explaining to me that, contrary to what my frustration might suggest, parking tickets in our area have been among the cheapest in a vast space until 2019, when a vote by county commissioners agreed to raise the parking fee from $18 to $36.

I mentioned that I was occasioned to write the email after receiving, in relatively quick succession, three parking tickets. He then offered to pacify me by forgiving one (he specified: one) of my three tickets.

After several attempts to reach the office of Eileen Higgins,

the commissioner for District 5 (where I live), hoping to learn how this price hike happened, and where she stands on it, and whether or not she agrees that it’s a burden to the rich and an attack against the poor, I still have no answer. (To clarify: while the cost of living in Coral Gables is high, its streets are occupied by many more lower-income service workers than residents.)

I’ve emailed Commissioner Higgins’s office repeatedly, inviting her for a guest appearance on Thousand Movie Project Podcast to discuss the larger political moment and, tangentially, how a person might engage with their local government in order to avoid such things as price hikes; I’ve called her office twice, and on both occasions was told, by the person answering phones, that she (the person answering the phones) would “do research” on the matter of parking fees, and get back to me; when these proved dead ends I tried, more recently, to engage Commissioner Higgins via Instagram DM, dated April 20.

She left me on read.

The likelihood of getting in touch with anyone in a position of local authority who will take accountability for the price hike in parking tickets and offer, as explanation as to why the money garnered from parking tickets is so critically important as to warrant the routine financial hobbling of poverty-wage workers in Miami-Dade County–well, the likelihood of such a response is obviously small.

But even in lowering my sights from the frustrations of national politics, against which the average voter is of course gonna feel totally impotent and helpless, I’m genuinely surprised to learn that even a glancing survey of one’s neighborhood authorities will turn up the same sort of evasion, indifference, and bloodletting of the poor that characterizes the national scene.

I guess the pain of such realizations is just, as an athlete might put it, naivete leaving the body.