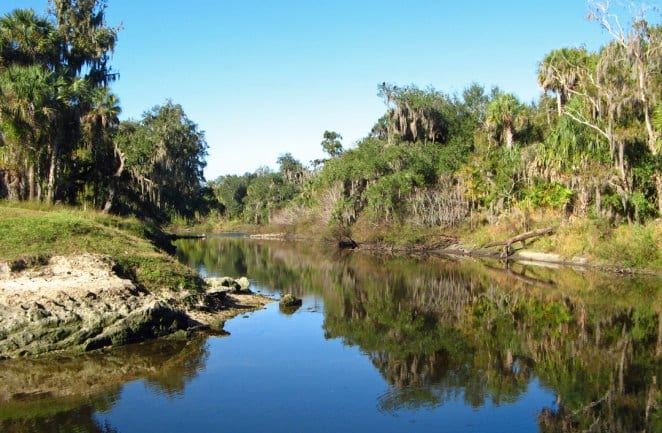 I timed it. Exactly sixty minutes from South Beach, if you leave on a Saturday morning you can be in the middle of nowhere. The only sight being the sugar cane fields draining the Everglades of their water and the only frequencies picked up on your FM radio are church sermons where there are more amens then there are praises to the Lord.

After passing Lake Okeechobee (which after intriguing me for years on maps with its vast blueness turned out to be nothing more than a giant marsh of sawgrass) and heading West through the town of Arcadia, you cross Peace River. I had heard of this Peace River many times growing up in Florida. It was where the old hippies went to ingest mushrooms. Or perhaps I had only heard one person saying they were going to partake in that activity there and with the river’s Grateful Deadish name it always held that connotation.

But on this morning the Hippies were hiding. This river had reptiles and birds and frat boys and families canoeing along, but no one in tie-dye in sight. This river got its name from the peaceful conditions of the flow of water. It was no trouble to paddle upstream through the water reddened by the shallow conditions.

If you own your own canoe you can park at many different spots along the river and paddle your way back. I was unaware of how docile the river was and rented from a place that dropped you miles upstream and then you canoed back to where you parked your car. They gave you an option of renting the canoe overnight where you can camp along the river. If I return that is what I will do.

The live oak trees with the breeze whistling though their Spanish moss serenade you. There was a turtle that told us this was not too overrun a river. I knew not to get too close as it would get scared off, but then I figured the turtle was used to people. But as I got ten feet away the turtle dove off the log and hid in the water.

Further along the river were much less skittish turtles. They basked in the sun, the three of them,  yards from an eight foot alligator. I had heard alligators only eat once a year, so perhaps these turtles were hedging their bets, but I never trust those green scaly smiles. And so I kept an appropriate distance from any gator I saw.

The highlight was the rope swing. Who are these heroes who climbed toward the sky and latch a knot on the tree’s highest branch so river rats can feel brave for a moment? There was an eighteen year old kid who was impressing some girls by doing flips, landing awkwardly on his neck and acting like the red mark on his back was no big deal. I was content to swing from the lowest branch, drop ten feet into the water and feel the Peace.